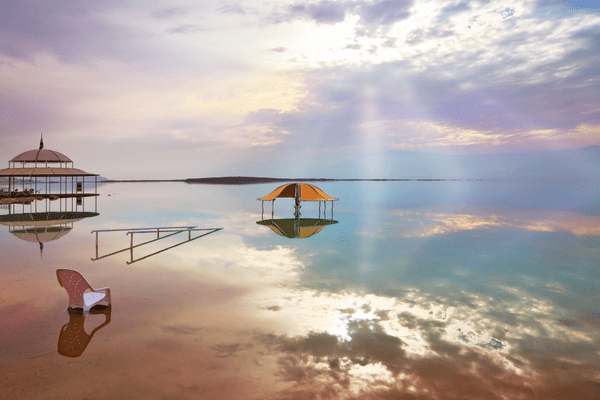 Hear my prayer, Hashem; give ear to my cry; do not disregard my tears; for like all my forebears I am an alien, resident with You.

In Psalm 39, David writes that he generally guards his mouth and refrains from questioning God, no matter what troubles befall him. But at some point, staying silent becomes too difficult to bear and he feels compelled to speak out. David asks God how much longer he has to bear his suffering. He acknowledges that his suffering is a result of his sins, and he asks God to heal him now that he has learned his lesson.

In this context, David pleads:

“Hear my prayer, Hashem; give ear to my cry; do not disregard my tears; for like all my forebears I am an alien, resident with You.” (Psalm 39:13)

The Hebrew word for alien, ger, is also the word for a convert. According to Rabbi Menahem Azariah da Fano (1548 – 1620), an Italian rabbi, Talmudist, and Kabbalist, this word is an illusion to the fact that David descended from Ruth, a Moabite convert.

Why was it necessary for King David, the first king of the eternal Jewish monarchy, to descend from Ruth, the Moabite convert? And why does he allude to his ancestry in this psalm?

The story of Ruth and her conversion is found in the Book of Ruth. According to Rabbi Zeira, the Book of Ruth was written in order to teach the importance of kindness. However, there is another opinion that explains the need for this book. According to the Zohar Chadash, it was written in order to present the lineage of King David. This is supported by the fact that the book concludes with King David’s genealogy (Ruth 4:18-22).

Other major characters in the Bible are introduced with a genealogy, such as Abraham, Moses and Samuel. But more than just the origin story of a particular king, the genealogy in Ruth provides the origins of the very institution of Jewish monarchy. This is why the lineage is introduced with the phrase v’eileh toldot, “this is the line of” (Ruth 4:18). While this phrase is commonly used in the Book of Genesis, it only appears twice in the rest of the Bible. The first is in Numbers 3, where it introduces the priestly genealogy, and the second is here, at the end of the Book of Ruth, where it introduces the kingly genealogy. These two genealogies are the only two times that a family is selected for a specific role to lead the nation, and hence they are introduced with the same phrase.

There is a well known debate about the Bible’s approach to monarchy. On the one hand, when the Jewish people requested a king in the Book of Samuel, Samuel was very upset. God seems to agree with him that the request is inappropriate, and tells Samuel that in requesting a king they are rejecting God (I Samuel 8:4-9).

However, in Deuteronomy the Torah seems to allow, and some say even command, that the Jewish people appoint a king (Deuteronomy 17:14-20).

Commentators explain that the legitimacy of a monarch hinges on the motivation in appointing the king. What was inappropriate about the request in Samuel was that the people wanted the king in order “to govern us like all other nations.” Since their motivation was to be like the other nations, the request was improper. However, if the purpose of appointing the king is to keep the people on the path of God, then such a king is not only legitimate but beneficial.

Throughout the Bible, however, there seems to be an uneasiness with the monarchy. On the one hand, it is necessary to maintain order, an idea which is clearly expressed in the Book of Judges: “In those days there was no king in Israel; everyone did as he pleased” (Judges 17:6, 21:25).  A king is also required to further the national purpose of the Jewish people: to bring about a universal recognition of the Divine and to disseminate this recognition throughout the world. Succeeding in this mission requires a strong and stable government.

On the other hand, we see throughout the Bible that having a monarchy is fraught with challenges, and that concentrating the power of the kingdom into the hands of one individual has the potential to corrupt. Indeed, there was not even a single righteous king from among all of the northern Israelite kings! This is why the Bible places restrictions on the king, which are meant to serve as a system of checks and balances in order to keep the king on the right path and prevent him from abusing his power.

Dr. Yael Zeigler suggests that the Book of Ruth provides a solution and proper framework for the institution of monarchy. As we have shown previously, Ruth serves as an extreme example of kindness and selflessness. In that way, she models the type of behavior that is expected of a king of Israel. With this “kindness DNA” in their genetic makeup, the kings that descend from the Davidic line have a chance of overcoming the challenges and temptations that come along with being given absolute power. They have the ability to put aside their own egos in order to look out for the good of their subjects and their country, and to lead the people in their divine mission of bringing godliness and morality to the world.

With this understanding, we can reconcile the two reasons given for why the Book of Ruth was recorded in the Bible. It was written to teach the importance of kindness, as Rabbi Zeira asserts, specifically the type of kindness that was essential in creating and sustaining the Davidic dynasty. And this also explains why King David descended specifically from Ruth, the Moabite convert who excelled in kindness and selflessness.

Perhaps by hinting to Ruth in Psalm 39, David was begging God to hear his prayer, if not for his own merit than in the merit of his kind and selfless great-grandmother Ruth.