The Definition of Man – A Poetic Paradox 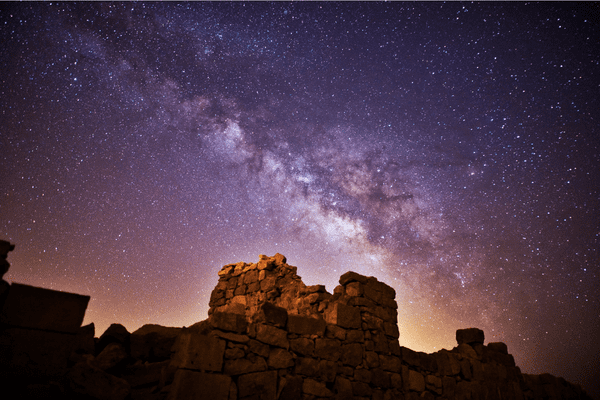 Hashem, our Lord, how majestic is Your name throughout the earth!

These two verses form the bridge between the two halves of Psalm 8. In the first verse, King David asks “what is man that you have been mindful of him?” implying that Man is nothing at all. In the second verse, David continues “You have made him little less than divine.” This implies that man is great, almost as great as God himself! How can we understand the contradiction between the two halves of this Psalm? What message is King David trying to impart with this paradox? How can man be both insignificant and God-like at the same time?

The first half of the Psalm, verses 1-5, discusses God and describes His dominance, omniscience, and omnipotence vis a vis man and all other living creatures. He is too great for the earth and belongs in the heavens:

“God, our Lord, How majestic is Your name throughout the earth, You who have covered the heavens with Your splendor!” (Psalms 8:2)

Rabbi David Kimchi, a 13th century rabbi from Spain, explains this verse to mean that while God’s strength and power can be seen throughout the land, His beauty, awe, and splendor are reserved for the heavens alone.  This section praises God, His awe and splendor soar beyond man’s comprehension. Man is not even on the map:

The second half of the Psalm, however, starts with man at his height – just a little less than God:

In the second section of the poem, Man stands at the height of creation; it was for him that the world was created.

We ask ourselves, how can this paradox exist?  Was it David’s intention to exalt God and reflect on Man’s insignificance, or the opposite – to praise man as the highest form of life under God?

Before we explore this question, it should be noted that one thing stands out in the style of the psalm. When speaking about God, David says “When I behold Your heavens” (verse 4). The concern is entirely with how man perceives God and himself in God’s world.  Isn’t it interesting that the theocentric first half of the Psalm is nevertheless described from man’s perspective, just like the anthropocentric second half.  I would have expected the first half to be more removed from man; when man is a speck in the universe of God, what is his place using the ‘I’?

The author’s intent is to build the paradox inside the mind of man.  We can debate about our worth, God’s interest in us, and the celestial spheres versus the worldly ones as long as this discussion is rooted in our minds.  Thus, the personal element transcends the entire psalm despite a seemingly contradictory stance in the first section.

Before returning to the paradox of Man’s worth, let us first ask an additional question which might provide the key to unlocking the message of the poem.

There is only one transitive verb which begins a verse in this psalm.  That verb sets off the crucial sixth verse, which begins the second, anthropocentric segment of the psalm.  I refer to the Hebrew letter vav which, as a prefix, can have several different meanings. In addition to its other meanings, vav in Biblical Hebrew can mean either ‘and’ (conjunction) or ‘but’ (negation).

This vav either functions as an addition to what was said before, or introduces a contrast to that which has already been stated.  How do we view the vav in our crucial sixth verse?

On the one hand, a conjunctive vav comes to include man as just another part of His creation and grand plan.  “And the Lord created the heavens, the earth, trees, dinosaurs, man, insects, shrubbery ….”  This approach humbles man, it forces us to realize our place in God’s world and gives us pause in our day.  Take a look at a picture taken by the Hubble space telescope.  In it are to be seen thousands of galaxies, millions of worlds, and our earth does not even merit a speck on the picture. Where are we, then, in the greater scheme of things?

It is this attitude that describes man’s perspective at night, “when I behold Your heavens, the work of Your fingers, the moon and stars that You set in place” (verse 4). At that time man looks up to God with faith, out of fear of the other elements in the world.

At night, in times of insecurity and fear, man looks to God for shelter in this world. The reaction of “what is man?” captures our greatest fears and our most humbling experiences as but another creature created by God in this wide world.

But then there is the negating vav.  It does not mean AND, rather, BUT.  When wielding this definition of the word we stand erect.  We recognize ourselves not as another created being, but as the reason for creation.  We are not incidental to the world but the center of it!

On earth, we rule.  Man is the highest life form – the most creative, communicative, thinking, feeling creature.  Man is capable of building skyscrapers, launching spaceships, finding cures for diseases, performing heart transplants; there is no limit to our ability.

This attitude permeates the morning of our day, when we are confident, self-assured, and self-involved.  Not only is man highly evolved but he is created in the ‘image of God.’  Interpretations of this phrase vary, but one interpretation focuses on the innate Godly nature inside all of us.

In this state, when we could be swept away by our self-absorbed feelings, we remind ourselves through the psalm that the discussion is still based on man’s relationship to God.  At a time when we least think about God, that is when we must be reminded of Him.  The final line in the psalm, therefore, is a reversion to its opening – “Hashem, our Lord, how majestic is Your name throughout the earth!”  Just as we remember and rely on God in our times of insecurity, we must remember that we are reliant on God at our times of strength as well.

We start out as unimportant, and amidst our feelings of insignificance we recognize (through the style of the psalm) that we are still able to speak to God.  The critical ambiguous vav turns the poem on its head as we begin to take pride in our ‘almost Godlike’ status.  At this time, too, we hesitate approaching God, not due to humility but exactly the opposite – arrogance.  The final line echoing the opening one says that in our morning and our night, in pride and humility, in feelings of finiteness and infiniteness – we still speak straight to God, His glory is always upon us.

David uses two poetic tools to demonstrate his dialectical, yet, cohesive stance.  The ambiguous vav aims to stimulate two opposing worldviews.  The inclusion (a poetic tool which through repetition of words aims to bring one full circle in a poem or story) fuses the two together; it tells us that it is not only possible to have both feelings, but it is indeed what being human is all about.  Some days we will feel the conjunctive vav – as a cog in the ever-expanding galaxy.  Other days we will feel the opposing vav – the world is our oyster.  All of our days we must recognize who created us and acknowledge these kaleidoscopic feelings as part of the beauty of God’s creation.

It is said in the name of the famous “Kotzker Rebbe,” Rabbi Menachem Mendel of Kotzk, that each person should always have both pockets filled.  In one pocket one should have the words “I am dust of the earth,” in the other pocket, “for me the world was created.”  Contradiction?  Yes, and that is the message of the psalm.