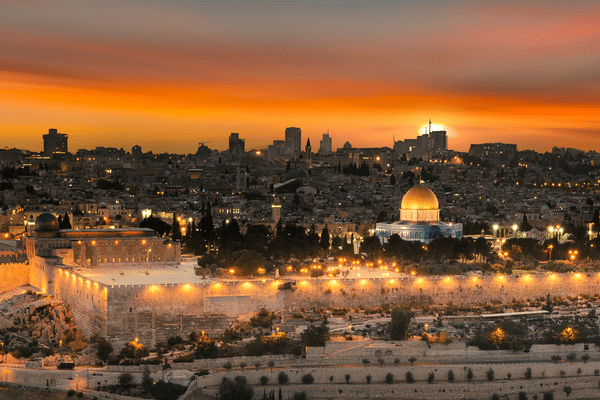 O that the deliverance of Yisrael might come from Tzion! When Hashem restores the fortunes of His people, Yaakov will exult, Yisrael will rejoice.

If any wisdom could be learned in the hustle and bustle of Queens, New York in the 1980s, Steve had learned it. With a belly that entered the room three full minutes before he did, Steve was an urban guru. One time, when we were hanging out watching television with the volume turned off, I asked him, “Where does the flame go when I blow the candle out?”

He then launched into a monologue explaining that not only did the flame disappear, but darkness entered the room.

Steve spoke with a conviction that seemed to come from a place of hard-earned experience.

“I knew this guy who seemed okay, but any time we passed by a beggar in the street he acted like he didn’t see him. I couldn’t figure it out. He seemed decent enough but I never saw him do anything nice. Then I found out that he was doing really horrible things in secret after hours. I don’t want to talk about it or even think about it. But nice is a thing and evil is another thing. Nice isn’t just something that happens if you don’t torture small animals.”

I thought about this for a while, finally concluding that Steve was right. There are a lot of people doing horrible things, people who seem fairly okay until you take a closer look.

Steve knew this, and a bunch of years later I found out that King David knew this as well. He even wrote about it in Psalms!

FIND OUT WHAT KING DAVID HAD TO SAY ABOUT EVIL

The internet reveals so much, making me wonder if there were always so many horrible people in the world. But when I read the Psalms I realize that there was never any lack of evil.

David writes at the beginning of Psalm 14:

The benighted man thinks, “Hashem does not care.” Man’s deeds are corrupt and loathsome; no one does good. Psalms 14:1

Really, David? No one does good?

The psalmist paints a dim picture of humanity with corruption in command and desire reigning. God peers from the heavens and wonders if anyone still contemplates and seek out the Creator. Maybe David exaggerated, but not by much. And he also gave an important lesson about how evil works. It begins by taking God out of the equation, assuming that God does not care. Once you remove God from your world, evil begins to creep in.

After lamenting how the world is evil, David notes that this belief in an uncaring God inevitably leads to one thing; a hatred of Israel.

History has shown time after time that evil people always hate Israel. This is not because Israel is so good or so righteous. But the Jewish people have always served as a divine litmus test. Anyone who hates God can’t stand the Jews, because the Jews represent God in this world. And usually people who love God express this love through loving Israel.

The psalm concludes with the hope of the ultimate redemption, as the salvation of Israel will come when the nation of God returns to the land. Then, Jacob will rejoice and Israel will be happy.

O that the deliverance of Yisrael might come from Tzion! When Hashem restores the fortunes of His people, Yaakov will exult, Yisrael will rejoice. Psalms 14:7

We are approaching the end, the time of deliverance when all things will be revealed, hearts will be tested and God will call to those who love Him. Now is the time to look inside ourselves and ask ourselves honestly, “am I really a good person?”

It is not enough to be okay, a person has to be actively good. Let all those who love God, all those who can say “Yes, I am good!”, gather in Jerusalem to rejoice and sing His praises.