Machpelah: More Than Just a Cave 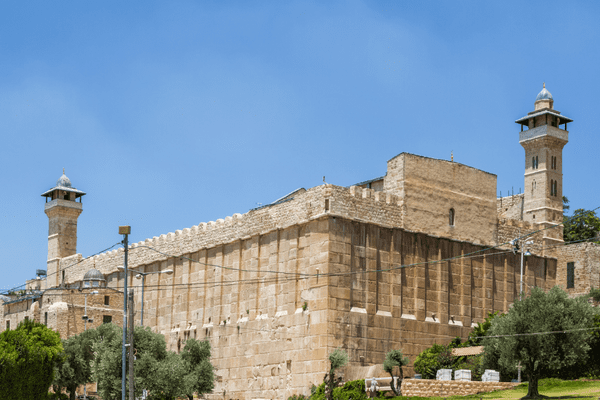 Thus the field with its cave passed from the Hittites to Avraham, as a burial site.

This coming Saturday Jews will read the Torah portion known as Chayei Sarah (The Life of Sarah). The portion begins with the death of Sarah, the matriarch, and describes Abraham’s purchase of the Machpelah Cave in order to bury her.

Hebron will be full to overflowing this Shabbat when thousands of Jews go their to celebrate this purchase as is the custom of many on the Sabbath on which this Torah portion is read. Some critics reason that the purchase was due to Abraham’s lack of faith that God would fulfill his promise to give him the land as He promised in the covenant, but the sages understood the purchase differently.

Of course, Abraham had an immediate and pressing need to bury Sarah, his wife. But the purchase of this land was far more than a real estate transaction. The land itself, in particular the cave located on the land, was remarkable.

What is so special about this cave, and why did Abraham insist on purchasing it?

When Abraham set out to bury Sarah, he looked for a cave, as per the burial custom of the time. The cave he decided on was in the field of Ephron the Hittite, and the Bible refers to it as the Cave of Machpelah. The word machpelah comes from the Hebrew word kaful (כפול), meaning ‘double’. The commentators explain that the cave is actually a double cave. According to the medieval commentator Rashi, it is one cave above another, while the commentator known as the Ibn Ezra explains that the arrangement is one cave inside another, i.e. an entrance cave leading to an inner cave.

The sages teach that God had buried Adam in this same cave. When Abraham chose this cave, he understood that it was a divinely chosen burial site for the righteous, but Ephron was unaware of this when he sold it.

In addition to Adam and Eve, who are both buried in the cave, it became the ancestral burial site of the line of Abraham. It became the final resting place for Abraham and his wife Sarah, Isaac his son and his wife Rebecca, and finally Jacob and his wife Leah. Rachel was relegated to a lonely final resting site in Bethlehem, from which she prays for the Jews in exile.

This aspect of the holy site is emphasized by the name of the city surrounding it; Hebron. According to a Midrash quoted by Nachmanides, the Hebrew name for Hebron, ‘Chevron’ (חברון), is a contraction of the word chaver (חבר), ‘friend,’ and the word na-eh (נאה) ‘beloved.’ Thus, the very name of the city of Hebron alludes to its most famous resident Abraham, who was the first beloved friend of the Lord, as God says in Isaiah (41:8), “Seed of Abraham My friend.”

Another Midrash explains the name Machpelah by saying that any one buried there could expect a double reward in the future world. In a similar vein, the name was given because the cave connected two worlds; this world and the next world. Abraham knew this when he purchased the site because recognized the fragrance coming from the cave as the fragrance of the Garden of Eden. Thus Abraham understood the significance of this specific place.

The sages explain Abraham’s motivation for purchasing the site. Though it is true that God promised the entire land of Israel to his descendants, Abraham knew that the other nations would come to refute this covenant, questioning its validity and perhaps arguing that it is no longer relevant. But even the nations understand that a sale is final, and a transaction is binding once the gold is handed over. The sages note that even when the nations make a claim against the covenant, there are three sites in Israel that they can never claim the descendants of Abraham stole because the purchase is explicitly described in the Bible: Hebron (Genesis 23:16), Shechem (Genesis 33:19), and the Temple Mount (II Samuel 24:24). Both David (Temple Mount) and Abraham (Hebrew) were offered the land as a gift, but they insisted on paying an exorbitant price for the land in order to ensure that their claim to this places could never be disputed.

It is therefore disturbing that today, it precisely these three locations which the Arabs claim as their exclusive property and which the United Nations claims have no historical relevance or religious significance to the Jews.

The Zohar, a foundational work of Jewish mystical thought, explains the reason for the name Machpelah differently: “Jerusalem and all of the Land of Israel was folded under it.” So when Abraham purchased the Machpelah Cave, he was really purchasing the entirety of the land of Israel.

While Jerusalem is the heart of Israel, Hebron is a doorway into its soul. Abraham understood this when he chose to purchase the Machpelah Cave. Caleb understood this too, when he went directly to Hebron upon first entering the land as one of the 12 spies. And David understood this, establishing his capital in Hebron for seven years before setting up his dynasty in Jerusalem.

Living anywhere in Israel is a manifestation of the eternal covenant between God and the Jewish people. But this Sabbath, it is Abraham’s purchase of the Cave of Machpelah that will be celebrated in Hebron.