Kristallnacht: A Lesson for All Time 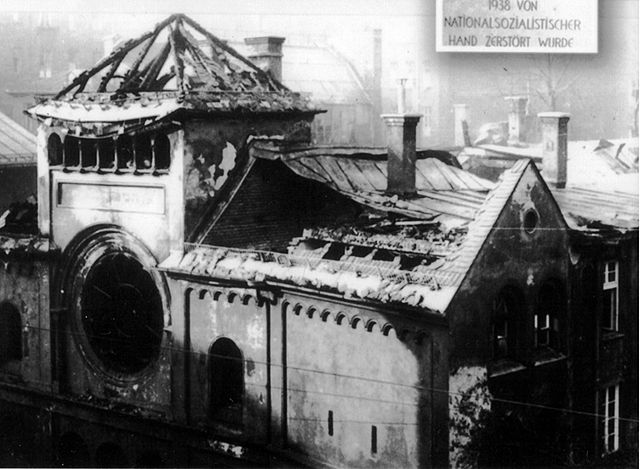 For I have singled him out, that he may instruct his children and his posterity to keep the way of Hashem by doing what is just and right, in order that Hashem may bring about for Avraham what He has promised him.”

The Holocaust, a systematic attempt to exterminate the Jewish people carried out by the German Nazi party during World War II, is a dense cloud of darkness in human history that should never be forgotten lest we descend again into the abyss of evil. Though it was ultimately unsuccessful, six million precious Jewish souls went up in flames. Most historians state that the Holocaust took place between 1941 and 1945, but the events leading up to the Holocaust, setting the stage and allowing it to happen, began much earlier.

Until the 1920s, Germany’s 500,000 Jews (.86% of the population) were fully integrated into German society. This began to change after Adolf Hitler, head of the National Socialist German Workers’ Party (Nazi), was elected chancellor in 1933. The German government began enacting a series of anti-Jewish laws restricting the rights of German Jews to earn a living, to enjoy full citizenship, to gain education, and to work in civil service. In 1935, the Nuremberg Laws stripped German Jews of their citizenship altogether and prohibited Jews from marrying non-Jewish Germans. But one event in particular marked the beginning of the darkest period in human history: Kristallnacht.

What does Kristallnacht mean and what exactly happened during that event?

Kristallnacht, literally ‘crystal night’, was a pogrom against the Jews which began on November 9, 1938 and continued for 48 hours. It is also referred to as ‘the Night of Broken Glass’  for the shards of broken glass that littered the streets after the windows of Jewish-owned stores, buildings, and synagogues were smashed.

The pogrom was carried out by the Nazi Party’s paramilitary forces and aided by Hitler Youth and civilians, while the government looked on without intervening and firefighters watched as Jewish homes and businesses burned. Rioters torched more than 1400 synagogues throughout Germany, Austria, and the Sudetenland, and over 7,000 Jewish businesses were damaged or destroyed.

Jews were viciously attacked and publicly humiliated. The official figure for Jewish deaths, released by German officials in the aftermath of Kristallnacht, was 91, but recent scholarship suggests that there were hundreds of deaths, especially if one counts those who died of their injuries in the days and weeks that followed the pogrom. Police records of the period also document a high number of rapes, and of suicides in the aftermath of the violence. 30,000 Jewish men were arrested and incarcerated in concentration camps

Kristallnacht changed the nature of Nazi Germany’s persecution of the Jews from economic, political, and social exclusion to physical violence. Prior to this large-scale and organized violence against the Jews, the Nazi’s primary objective was to eject them from Germany, leaving their wealth behind. After, it was extermination.

But perhaps the most psychologically damaging aspect for many Jews was seeing their friends and neighbors turn on them in such a dramatic way.

Ruth Rack, a Holocaust survivor who was ten years old at the time of the pogrom, recalled trying to make her way to the Polish Consulate with her family. She said:

“I do not know how long the journey from our home to the consulate lasted, but what we saw on the way [was] a nightmare… There were wild crowds of jeering people everywhere, among them the woman who ran the local corner grocery store, the one who sold me lollies by the single piece. I liked her … I had thought we were friends and I was deeply wounded to see the unreasonable hostility in her face and to hear her yelling at us with the rest of the hostile crowd of Germans.

Professor Zvi Bachrach was also ten years old during Kristallnacht. He recalled how until that night, his parents felt like they were so much a part of German society that they couldn’t fathom that the restrictions on the rights of German Jews was anything more than a passing phase:

The idea of standing by while others suffer is completely antithetical to the values of the Bible. In fact, in this week’s Torah portion, the portion of Vayeira, Abraham teaches us what it means to recognize injustice and do whatever it takes to stand up for others.

When God informs Abraham that he intends to destroy the cities of Sodom and Gomorrah, Abraham doesn’t say “Ok, God, you know best.” Instead, he challenges God and begs him to save the city:

Of course, God knows best and Sodom and Gomorrah were ultimately desstroyed. But not before Abraham bargained and pleaded, trying everything he could to save the people of Sodom.

It was this because of this trait of doing the right thing and standing up to injustice that God chose Abraham to be the father of His chosen nation, as God himself says a few verses earlier. I know that he will “instruct his children and his posterity to keep the way of Hashem by doing what is just and right” (Genesis 18:19).

Elie Wiesel, a political activist and Holocaust survivor, spoke personally about why being Jewish means caring about the rights of all human beings during his Nobel prize acceptance speech in 1986:

“Since I am a Jew profoundly rooted in my people’s memory and tradition, my first response is to Jewish fears, Jewish needs, Jewish crises… But there are others as important to me. Apartheid is, in my view, as abhorrent as antisemitism… As long as one dissident is in prison, our freedom will not be true. As long as one child is hungry, our lives will be filled with anguish and shame… [T]he quality of our freedom depends on theirs.”

Kristallnacht was a glaring example of what happens when we don’t stand up for what is right and we fail to confront evil in the world. Let us follow the example of Abraham and do “what is just and right.”