How the Western Wall Gave Hope to the Exiles 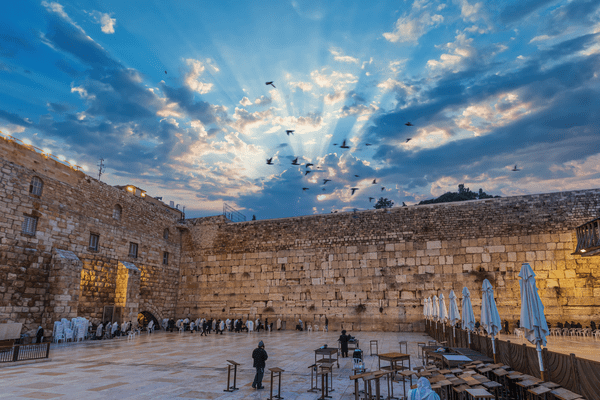 Sing a hymn to Hashem, who reigns in Tzion; declare His deeds among the peoples.

Psalm 9 opens in a perplexing manner:

For the leader; ‘almuth labben. A psalm of David. Psalm 9:1

This is the only time in the entire Bible that the phrase ‘almuth labben appears. Understood literally, the phrase can mean ‘upon the death of the son.’ But it is not clear what David means by using this phrase.

What exactly is David referring to with this phrase? Whose death is he singing about?

The enigmatic nature of this phrase has led to much conjecture. From the rest of the psalm it is clear that it refers to an opponent of David, as the psalm is a song of thanks and praise of God for saving him from his enemies. Not only does God protect and save David, but He destroys his enemies and eradicates their memories.

Who is this unnamed enemy? The medieval commentator Rashi offers several suggestions. His first suggestion follows the literal translation of the phrase “the death of the son.” Rashi suggests that this psalm is referring to David’s son, Absalom, who rebelled against his father and was ultimately killed in battle. Rashi, however, rejects this interpretation.

Rashi then suggests that Labben could be an anagram hinting at Nabal, a rich Carmelite who insulted and threatened David and was ultimately killed by God. But once again, Rashi is unsatisfied with his own explanation. His next suggestion is that Labben was one of the many tyrant kings that David defeated, noting that even though no such king was named elsewhere in the Bible, the Bible does not list all of King David’s exploits.

Rabbi David Kimchi (France 1160–1235) suggests that the phrase refers to Goliath, implying that this psalm was sung by David upon his victory over the Philistine giant.

Though it remains unclear exactly who David is singing this song about, it is clear that he has been rescued from a foe and is full of gratitude to God as a result.

After praising and thanking God, David contrasts his enemies, who have been defeated and destroyed, with God Himself, who rules forever. He judges the world in fairness and is a source of strength for the downtrodden. All those who recognize God put their trust in Him.

David then calls on those who trust in God to sing his praises:

Sing a hymn to Hashem (God), who reigns in Tzion (Zion); declare His deeds among the peoples. (Psalms 9:12)

This phrase leads to another question. Why does David describe God as the one who reigns in Zion if, at the time that David most likely sang this song, Zion was still in the hands of the Jebusites?

Rabbi David Kimchi explains that David knew that God would eventually rest his presence there, and that it would be the site where the future Temple would be built. He therefore describes God as the one who resides in Zion, knowing that Zion would be His ultimate resting place.

Rabbi Moshe Alshich takes this one step further. He writes that this verse was meant to serve as a form of comfort for the future exiles, the oppressed in veres 10 who put their trust in God. He instructs them to “sing a hymn to Hashem (God)”, because He “reigns in Tzion (Zion)” eternally. Though the nation will be exiled and driven out of the land, God’s presence will continues to dwell in the land forever. Despite the destruction of the Temple, God’s divine presence will remain at the Western Wall, a segment of the retaining wall of the Temple Mount from the Second Temple period, waiting for His children to come home.

The Western Wall is the holiest place where Jews are permitted to pray. The site of the Holy of Holies, the most sacred site in Judaism, lies behind it. Knowing that the presence of God resides at the Western Wall, waiting and yearning for His children to return, has served as a source of inspiration, encouragement and faith for the Jews in exile. It gave them hope that God had not abandoned them and they awaited the day that they would return and ascend to God at that location.

After two thousand years, God has fulfilled His promise and begun to bring His children home. The Western Wall is often the first place that they go after arriving in the Holy Land, seeking out God and basking in His presence.