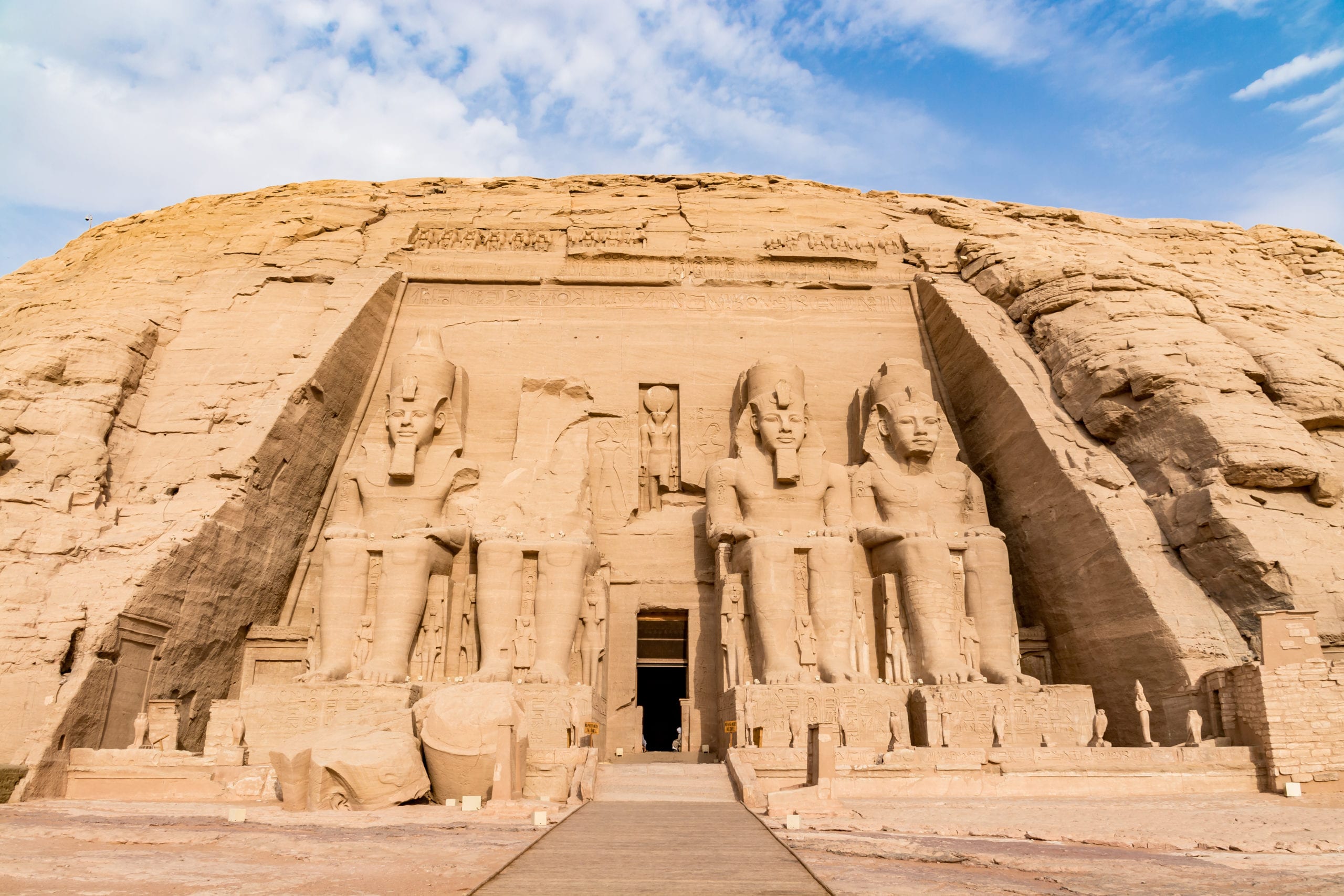 So they set taskmasters over them to oppress them with forced labor; and they built garrison cities for Pharaoh: Pithom and Raamses.

When confronted with a religious dilemma, Tim Mahoney, a deeply religious man, began what would become a long and painful voyage in search of the truth of the Bible, documenting his journey on video.

Asking questions so many have asked before but have been pushed aside in fear of finding an answer that challenged their faith, Mahoney sought to answer the ultimate question: Is the Bible, the basis of all Abrahamic religions, true? As fantastic as they sound, could the events that forged the relationship between the Hebrews and God really happen the way they were described in the pages of the Bible? If they did, then where is the proof?

Mahoney’s quest resulted in what has become a groundbreaking documentary called “Patterns of Evidence: The Exodus,” which sought to conquer the divide between science and religion by exploring the validity of the Biblical account of the Exodus through archaeological and scientific data. Directed by Mahoney, the film explored the argument set forth by Egyptologists who claimed the Exodus, as described in the Bible, never took place due to lack of physical evidence.

Mahoney’s investigation uncovered that objections to the Biblical version of the Exodus were based on a specific time-line connecting the Hebrews’ presence in Egypt to the reign of Ramses the Second (1279-1213 BCE), during the New Kingdom of Egypt. This was based on the verse in the Bible (Exodus 1:11) stating that the Hebrews built the city of Ramses, which archaeologists knew existed only during the 13th century BCE. There was no archaeological evidence of Semitic culture in the city, archaeologists said, and therefore the Exodus, despite being a nice parable to base a sermon on, has no factual basis.

Or so they believed.

Undiscouraged and using the Bible as a guide, Mahoney followed rumors of Semitic remains in the ruins of Avaris, a large city in Northern Egypt that in ancient times had a population of 30,000. Mahoney became excited when the chief archaeologist at the site, Manfred Bietak, revealed that the city had a special, elevated status, a type of free-zone. This seemed to match the Biblical description of Goshen as being separate from Egypt proper.

“And it shall come to pass, when Pharaoh shall call you, and shall say: What is your occupation? that ye shall say: Thy servants have been keepers of cattle from our youth even until now, both we, and our fathers; that ye may dwell in the land of Goshen; for every shepherd is an abomination unto the Egyptians.’” Genesis 46:33-34

Beitak described that proof of shepherding, an unusual practice in Egypt, was found around the remains of Avaris. Mahoney’s spirits dropped when Beitak said that he did not believe that Avaris was connected to the Biblical Exodus. “In my opinion, the settlement of the proto-Israelites in Canaan only happened from the 12th century BCE onwards,” Beitak explained in the documentary, adding that the city was built at least four centuries before the city of Ramses and ending before the Hebrews were thought to have arrived in Egypt.

With one of the world’s top archaeologists entirely rejecting any factual basis for the story of Exodus as described in the Bible, Mahoney was crestfallen, relating his emotions in the movie: “I was stunned…No Israelites in Egypt means no Exodus, and no Exodus means the foundation of Judaism is a myth.” This was a crisis in faith for Mahoney. “All my life I had believed the Bible stories were true. I know some people say, you don’t need any evidence; just have faith. But if there’s no hard evidence for any of it, had I been believing in a lie?”

Mahoney was being faced with prevailing scientific theory denying the basis of his belief. He turned to Professor David Rohl, an Egyptologist, asking him if the archaeologists, historians, and scientists were wrong.

“None of them are wrong about this,” Professor Rohl reassured him. “There is no evidence for the Israelites conquering the Promised Land at the end of the Late Bronze Age. That’s a fact.”

Mahoney understood that it was a matter of timelines. The scientists were looking for Joseph and the Israelites in the time of Ramses, and there was no evidence for this. But the lack of evidence for that timeline was actually a clue hinting that an earlier timeline might be the one proving the truth of the Biblical account. After some persistence and digging, Mahoney learned a new fact that may uncover the connection between Avaris and the Hebrews: Avaris ruins were from a foreign shepherding culture with architecture typical of northern Syria, the home of Abraham.

Mahoney met with Rohl, who was convinced that Avaris was Biblical Goshen, the area Pharaoh gave to Joseph for the Hebrews to live in. At the site, remains were discovered of a  palace built around 12 pillars with royal trappings. In the land adjacent to the palace were 12 impressive burial crypts. The most elegant crypt was a small pyramid containing an unusually large statue with skin painted yellow, red hair, and a multi-colored robe. Most intriguing was the fact that the crypt contained no human remains. This corresponded to the Biblical account of Joseph’s bones being carried back to Israel when the Jews left Egypt. There are indications that Avaris showed a later period of significant growth and prosperity, with artifacts of Canaanite origin that were clearly not Egyptian. These sites are still largely unexplored.

In another parallel to the Bible, a canal, built during the period of Avaris, still called the Joseph Waterway, connected the Nile to the Fayum Basin. Rohl suggested that it was constructed under the direction of Joseph in order to regulate the Nile flooding.

Mahoney also investigated the Bible’s claim that everyone in Egypt sold themselves to Pharaoh during the famine. Mahoney spoke with Egyptologist Bryant Wood about a period during the reign of Amenemhat in 1850 BCE, when Egypt switched from districts with wealthy local leaders to a period when Pharaoh became much more powerful and the local district leaders were subjugated. Rohl explained that, despite this conforming to the Biblical narrative, this is far too early for the traditional timeline of the Exodus based on Ramses in 1250 BCE.

Later periods of the dig in Avaris show graves containing skeletons with signs of malnutrition and stress. Even more shocking was an increase in infant graves, from a typical 25 percent rate to 50 percent, and an increase in the remains of females who made it into adulthood as compared to male remains. So the reduction seems to have happened on the male side, precisely as described in the Bible.

Rohl brings the Brooklyn Papyrus, a medical papyrus dating from ancient Egypt dating from around 450 BCE, as further proof. The papyrus documents the domestic accounts of an Egyptian household. Nearly 100 slaves, predominantly female, were listed with Semitic names. This papyrus is not from the New Kingdom when most Egyptologists place the Hebrews in Egypt, but from the Middle Kingdom.

Mahoney then went to the Dutch Museum in Leiden to investigate the Ipuwer Papyrus, a single page from 1250 BCE which is a copy of another papyrus from the 18th century BCE.  The earlier document records details of events that corroborate the Biblical version, describing the Nile as “blood” and servants running away. It describes a famine and the destruction of all the crops: “Plague sweeps the land, death is everywhere”. In a verse almost identical to the Bible, the papyrus states, “Wailing is throughout the land…yet the poor become rich, slaves take whatever they want.”  Nonetheless, any connection between the Ipuwer papyrus and the Exodus is discounted by archaeologists, because it comes from the Middle Kingdom, far too early according to classical theories.

Mahoney concludes that according to the timeline accepted by most archaeologists, connecting Joseph to the city of Ramses in the 13th Century BCE, then indeed there is no evidence for the Hebrews or the Exodus. But if an earlier timeline is applied, based as early as 1850 BCE, then there is ample evidence for the Biblical account of the sojourn of the Hebrews in Egypt, more specifically in Avaris as Goshen.