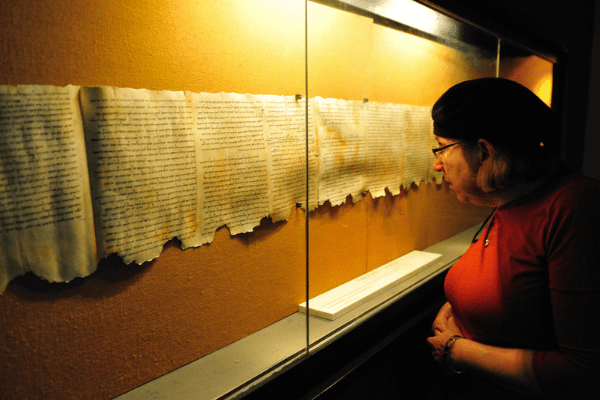 Thus said Hashem, the God of Yisrael: Write down in a scroll all the words that I have spoken to you.

In 1946, a Bedouin shepherd fell into a cave in Qumran and discovered a number of papyrus scrolls in pottery jars that he took back to his family. The shepherd sold a number of scrolls to an antiquities dealer for 7 Jordanian pounds. This discovery of the “Dead Sea Scrolls” has been called the “most significant discovery of the 20th century” since they contain the oldest Biblical manuscripts, going back thousands of years.

Today, the Dead Sea Scrolls are housed in Jerusalem’s Israel Museum and are constantly exposing new secrets of the ancient world, thanks to painstaking research and advanced technology.

Thousands of written fragments have been found and have been pieced together. Incredibly, researchers have found texts from all the Books of the Hebrew Bible except Esther, and nearly the entire Book of Isaiah.

Radiocarbon dating combined with handwriting analysis recently offered deep insights into the scribes whose hands inscribed the parchments over 2,000 years ago and demonstrated that  “two scribes likely received the same training or were even peers within the same scribal school” according to Israel365 News.

According to Roitman, the most significant feature of the Scrolls is that the large majority are religious documents.

“They are not about administration or regular life of the people, but they tell us about the thought, literature, and religious experience of Jews who lived in the land of Israel 2,000 years ago,” he said.

In fact, many of the religious rituals and customs of the Ethiopian Jewish community are almost identical to the type of Judaism described in the Dead Sea Scrolls, according to researcher and professor Dr. Yossi Ziv. Ethiopian Jews lived in exile and complete isolation from the rest of the Jewish people for thousands of years, but kept up their ancient traditions.

“The scrolls were written at the time that Judaism and Christianity were formalizing. The content of the scrolls, which talks about the Messiah, apocalypse, end of days, etc. brings the monotheistic world together in our common heritage.”

A major problem facing the Dead Sea Scrolls is the fear of looting and theft. The Israel Antiquities Authority is constantly chasing scroll thieves, and often discovering amazing artifacts. A 2,700-year-old papyrus that was plundered by antiquity thieves was recovered by the IAA, which contains the oldest known non-Biblical Hebrew reference to Jerusalem!

Dr. Eitan Klein, deputy director of the IAA’s Unit for the Prevention of Antiquities Robbery, emphasized in an interview that the papyrus indicates the importance of Jerusalem to ancient Israel. “It underscores the centrality of Jerusalem as the economic capital of the kingdom in the second half of the 7th century BCE,” Klein said.

New caves are still being explored and artifacts continue to be unearthed. Students from Liberty University excavated a cave only to find a pickaxe head from the 1950’s next to broken jars from the Second Temple period with their contents removed.

The story is far from over as archaeologists are still hoping for a major discovery — another Dead Sea Scroll. Only twelve miles east of Jerusalem, hundreds of caves remain unexcavated. The race is on to see who will find the next big discovery.