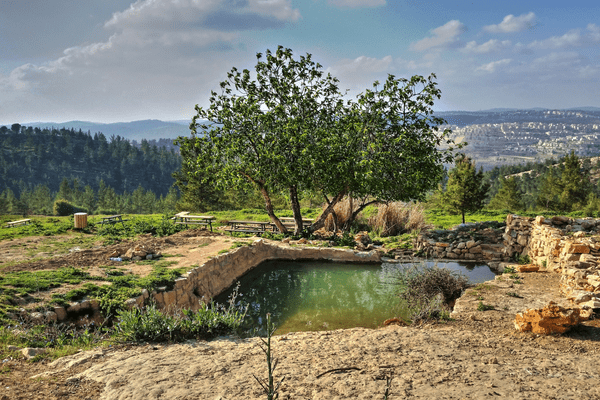 Of David, when he feigned madness in the presence of Abimelech, who turned him out, and he left.

In 1991, I moved to Israel and my journey back to God began. I was, what they call in Jewish circles, a baal teshuva (master of return). I moved to Sde Eliyahu, a religious kibbutz, and due to the hot climate of the Jordan Valley and the ultra-conservative nature of the religious community, I removed my earrings and trimmed my hair that reached to the middle of my back.

Looking to deepen my connection to God and become even more religious, I left the kibbutz and moved to a hilltop yeshiva (school for Jewish studies) in Gush Etzion. Every morning, I woke up before dawn, jumped into an ice-cold natural spring, went out to the woods to scream to (or sometimes at) God, and then sat down to study until I fell asleep in the Torah book that I was reading, usually close to midnight.

This ‘job’ had a uniform. My side curls grew long, wild, and bushy. My beard as well. My clothes, made for the city-dweller I used to be, got worn and ragged.

I loved my lifestyle but was faced with a minor crisis when my parents wrote to me, asking for a recent photo. I panicked. I knew that if they saw me, ragged and wild, they would not understand. I didn’t want to send them a regular photo showing my new look. They would think I had lost my mind. I honored their request by sending them a photo of me, standing on the hilltop overlooking the coastal plain, a tallit draped over my head. I chuckle when I look at the photo today. At the time, I thought it hid my crazy look. Now I realize that the photo made me look just like someone preaching the end of the world.

King David also had a moment in his life where he seemed crazy, which he mentioned in Psalm 34 (The Israel Bible, p. 1509-1510). What moment was this, and how is it relevant to my life-story?

Of David, when he feigned madness in the presence of Abimelech, who turned him out, and he left. Psalm 34:1

According to the commentators, this is a reference to the story in I Samuel 21. Forced to flee from his father-in-law, King Saul, David found asylum among the Philistines. He was eventually recognized and brought before the King. In order to escape, David feigned insanity and was thrown out in disgust. This psalm was written as a way of thanking God for his miraculous escape.

The sages revealed that there is even more to David’s “craziness” than what is written in the Bible. They relate that David had once questioned the necessity for insanity in the world. He told God that all He had created is beautiful, but he could not see any beauty or value in madness. God responded that one day David would not only need insanity, but that he would pray to God to give it to him. It was this incident in Gath that God was referring to.

A Hassidic tale is told of a young scholar who literally learned night and day. He was so immersed in his studies that it was beginning to harm his physical and mental well-being. His rabbi, who was not a Hassid, became desperate. He recommended to the young man that he visit a certain wonder-working Hassidic rebbe in a distant town. The young man resisted for several months but finally relented. As it was the middle of winter in Poland, he hired a sleigh and bundled up, covering every inch of his body with deep layers of padding.

When he finally arrived at the study hall of the rebbe, he decided to peek in from the outside before entering. By chance, he had arrived while the Hassidim were celebrating the wedding of two orphans. The band was playing loudly and the Hassidim were dancing wildly with joy.

But the young scholar had three wool scarves wrapped around his head and heavy earmuffs. He couldn’t hear the band that was hidden in a corner he couldn’t see the bride and groom who were hidden in blur of bodies at the center of the crowd. He didn’t understand that the Hassidim were dancing. He only saw them gesticulating wildly, drenched in sweat, with flushed faces and crazy expressions.

‘My rabbi sent me to an insane asylum,’ he thought. He returned to the sleigh and rode away, never to be seen again.

To be perfectly candid, being a religious Jew looks crazy to outsiders. It is an ongoing series of bad hair days. Tefillin (phylacteries) raises the Jew to a high level of holiness, but I have been told numerous times that it looks strange. The big billowy tallit I wear is unwieldy, but I am sure that it is the clothing of angels. Almost everything about being a religious Jew looks strange and illogical.

But it works. And it has kept the Jewish people close to God since Sinai.

When I speak to my non-religious friends, they tell me that they don’t keep Shabbat because it is uncomfortable, even painful. They explain that a day of rest must necessarily include television and a trip to the mall or beach. A day of rest must include hang-gliding or rock climbing. A day of rest is anything except for turning off all their electronics, turning off the internet, and sitting down for an open-ended meal with family and friends. That, they claim, is not restful. But I can’t think of anything more meaningful or restful.

When I met my wife, she was beautiful. But now, when I see her, I am stunned. Contrary to what the magazines and fashion industry would have you believe, a wife who dresses modestly and covers her hair would win any beauty contest, hands down. But the real beauty is in knowing she would never enter a beauty contest. My wife is beautiful, but only for me.

Science would have you believe that Man is descended from apes. So kids see their father as one step closer to being a gorilla. My kids understand that I am their link to Creation.

Yes, King David understood that sometimes, in order to serve God, you have to be a little crazy. And, indeed, sometimes serving God looks crazy. But underneath the craziness is a great truth. And if it only looks crazy and you can’t see the holiness, maybe you are not listening to the music.