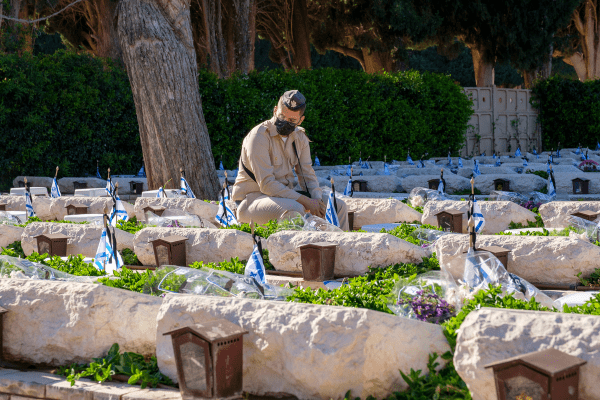 Your glory, O Yisrael, Lies slain on your heights; How have the mighty fallen!

Yom HaZikaron, Israel’s Remembrance Day, is observed on the 4th of Hebrew month of Iyar.  The full name of the day Yom HaZikaron LeChalalei Ma’arachot Yisrael ul’Nifge’ei Pe’ulot HaEivah (Memorial Day for the Fallen Soldiers of the Wars of Israel and Victims of Actions of Terrorism). It became an official holiday commemorating fallen soldiers in 1963, and was extended to include victims of terrorism in 2013. The day also commemorates deceased members of the Israel Police, the Mossad, and the Israel Security Agency (Shin Bet).

For the first two years after Israel was established in 1948, fallen soldiers were commemorated on Independence day, the fifth day of the month of Iyar. In 1951, the government began commemorating the “General Memorial Day for the Heroes of the War of Independence” on the day preceding Independence Day.

As of Yom HaZikaron 2021, 23,928 military personnel had lost their lives in service to the country and 4,176 as victims of terrorism. 56 IDF soldiers and security personnel died the following year, while 84 IDF disabled veterans died from their disabilities over the same period. In total, as of Yom HaZikaron 2022, 24,068 IDF soldiers, police officers, prison wardens, Shin Bet security service, and Mossad agents have been killed since 1860 defending the pre-state Yishuv and Israel. That number also includes members of the pre-state militias and the Jewish Brigade who served in the British army during World War II.

In Israel, sirens across the country are sounded for one full minute at 8:00 PM on the night of Yom HaZikaron, and a two-minute siren is sounded at 11:00 the following morning. It is a source of national pride that every person stands in place. Cars frequently also stop in place. 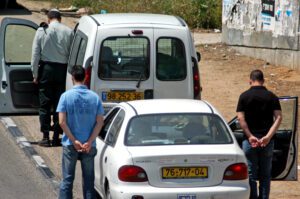 Standing for the siren on Yom HaZikaron (Shutterstock.com)

The official ceremony to mark the opening of the day takes place at the Western Wall. National memorial services are held in the presence of Israel’s top leadership and military personnel, and flags are flown at half-mast. Many people light memorial candles. The main service is held during the day at the military cemetery on Mt. Herzl in Jerusalem, where there is a memorial monument inscribed with the names of the victims of terrorism. 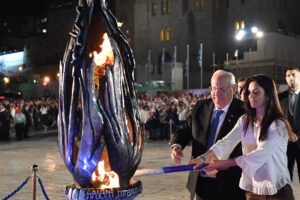 By law, all places of entertainment are closed on the eve of Yom HaZikaron, and broadcasting and educational bodies note the solemnity of the day. Regular television programs cease for the day, and the names and ranks of every soldier who died for Israel are displayed in a 24-hour television broadcast.

At night, the final ceremony ending the day is held at Mt. Herzl National Cemetery and Independence Day commences. In many countries, Remembrance Day for fallen soldiers and Independence Day occur on two separate days of the year. Scheduling Yom HaZikaron right before Independence Day is intended to remind people of the price paid for independence, and of what was achieved with each soldier’s sacrifice. This transition shows the importance of this day to Israelis, most of whom have either served in the armed forces, have a connection with people who were killed during their military service, or both.

Should the official date for either Yom HaZikaron or Independence Day fall out on Saturday night, they are observed one or two days earlier. When Yom HaZikaron falls on Saturday night/Sunday, both observances are rescheduled to one day later. Since the 4th of Iyar can only ever all out on a Sunday, Tuesday, Thursday or Friday, this means that in practice, Yom HaZikaron is only actually observed on the 4th of Iyar if that date is a Tuesday, a relatively rare occurrence.