Why do we eat pomegranates on the Jewish New Year? 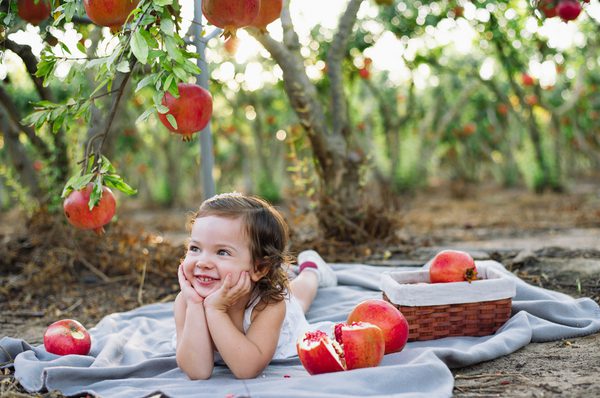 Your limbs are an orchard of pomegranates And of all luscious fruits, Of henna and of nard—

The pomegranate is one of the seven special agricultural species of the Land of Israel (Deuteronomy 8:8). It has always been a symbol of beauty. Its unique shape is a favorite design element, appearing on the priestly garments and on the pillars at the entrance to the Tabernacle in Jerusalem, as well as in many forms of artwork to this day.
At its crown, the pomegranate has a six-pointed star, which makes it the only place the Magen David, ‘star of David,’ appears in nature. The pomegranates’ numerous seeds have a symbolic meaning. According to Jewish teachings, they represent the 613 biblical commandments of the Torah. On the Jewish New Year, Jews say a special prayer over the beautiful fruit, “May our good deeds be as numerous as the seeds of a pomegranate.”
But there is a more profound meaning behind the pomegranate. The Talmud teaches that even a Jew who appears empty of merits has fulfilled as many commandments as the number of seeds which fill the pomegranate. What this means is that though someone might look empty or lowly on the outside, we must look past their initial appearance to the good that they contain within. Sometimes it takes great effort and a lot of digging to find the good within a person, but if you dig deep enough your efforts will be rewarded. This idea is reflected in the pomegranate fruit itself. The outside of the pomegranate is not edible, and to extract the seeds requires effort. But once you get past the rough exterior and put in the effort, you will find the delicious seeds.
The Talmud records that even the inedible portions of the pomegranate have an important use. The Passover sacrifice has to be roasted on a pomegranate branch, and there is also an opinion among the Sages that the branch that Moses threw into the water to make it sweet was the bitter branch from a pomegranate tree. The pomegranate symbolizes that even people from whom we don’t expect much, and on the outside seem inadequate, can serve an elevated purpose.
Perhaps this is another reason why the pomegranate is eaten on the Jewish New Year. On the New Year God judges every person and determines what the coming year will have in store for them. As we stand before God in judgement, we ask him to look beyond our inadequacies to the good within us, and to judge us, not based on our sins and missed opportunities, but the good that we have done and the people we have the potential to become.