Why Can’t We Stop the Terrorists? 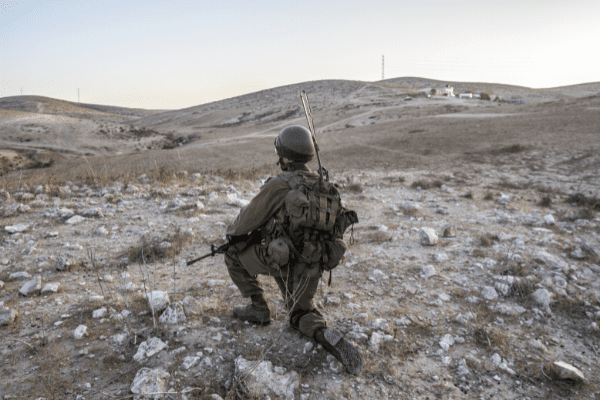 Is the country in which they dwell good or bad? Are the towns they live in open or fortified?

For over 2,000 years, the people of Israel were scattered throughout the world, always vulnerable to the machinations and attacks of their enemies. With the modern miracle of the Jewish people’s return to the Land of Israel, this dynamic was supposed to change. With its own country and military, the Jewish people would finally be safe and secure.

Sadly, despite fielding the Middle East’s most advanced military, Israelis remain vulnerable to attacks by Arab terrorists. But why is this so? Why do God’s people remain so vulnerable?

I learned the answer to this riddle from an unexpected source: a Bible quoting Israeli bus driver!

When I moved to the small Judean town of Bat Ayin in 1994, the only road leading to the town went through the heart of Bethlehem. The ink on the Oslo Accords was still drying, and Bethlehem had recently been turned over to the Palestinian Authority. The road through Bethlehem twisted through ancient alleys and ran over rough cobblestone streets. An inordinate number of babies born in those years were named ‘Benjamin’, having entered the world at Rachel’s Tomb, the long road and rough drive bringing on birth before the mother could get to the hospital in Jerusalem.

The Israeli government set to work on Route 60, a faster road that bypassed Bethlehem by tunneling through a mountain and bridging a deep valley. The new road was a blessing, cutting the Bat Ayin-Jerusalem trip from 45 minutes to 20. But the IDF checkpoint at the entrance to the tunnel looked suspiciously like a border crossing, hinting at the Oslo plan to turn the region into a Palestinian political entity.

Unsurprisingly, the Palestinians did not cooperate, rejecting the Oslo agreement and reverting to terrorism and the Intifada. The new road became a liability as snipers in the Arab villages in the surrounding hills fired with impunity at the Jewish motorists.

The Egged buses were heavily armored and apartments in Gilo, the southernmost neighborhood in Jerusalem, were refurbished with government-subsidized bulletproof windows. I specifically remember one bus ride to Jerusalem. The driver was a regular I often chatted with, a tough Israeli. He was relating how Arabs had shot at him that morning, shattering his rear view mirror which had to be replaced before he continued his route. He was upset that the shooting had put him 20 minutes behind schedule.

As we approached the bridge, the driver growled, “That’s new.”

We looked up to see that the IDF had lined the bridge with tall concrete barriers, protecting the motorists from Arab snipers.

“Are the towns they live in open or fortified?” the driver asked, adding that he was quoting Numbers (13:19). He saw that I was confused and didn’t understand the reference.

The driver explained: “When Moses sent spies to scout out the Land of Israel, he told them to gather intelligence. ‘Is the country in which they dwell good or bad? Are the towns they live in open or fortified?’ Rashi (a great Medieval Rabbi) wrote that if they live in unwalled cities, it showed that the inhabitants were strong, trusting in their own strength,” the driver said. “If, however, they live in fortified cities, they are weak and insecure, unwilling to fight in their own defense.”

Not long after that bus ride into Jerusalem, a video surfaced showing an IDF sniper, hidden on a rooftop, who had spotted an Arab sniper. The soldier was pleading with his commanding officer to give the order to eliminate the terrorist. The order never came.

From the ashes of the Holocaust rose the modern State of Israel. Miraculously, Israel has survived seven wars in which its Arab neighbors tried to wipe it off the map. We have survived several Intifadas and thousands of rockets from Gaza mercilessly fired at our civilian centers. With God’s help, we have survived.

But unfortunately our leadership has become fearful. We have built “fortified cities” to hide inside, while Arab terrorists walk securely through the Land without fear.

I am immensely proud of the young men and women who serve in the IDF. I once served, protecting them when they were children. Now that I am old, it is their turn. I would much rather they never don the rumpled fatigues that are the IDF’s badge of honor. I would rather they stayed home, raising children of their own. But there are worse things than men going off to war – like cowering behind concrete walls while evil grows outside.

Let us pray that Israel’s leadership finds the courage to stand up to evil – without fear!