What is the Book of Maccabees? 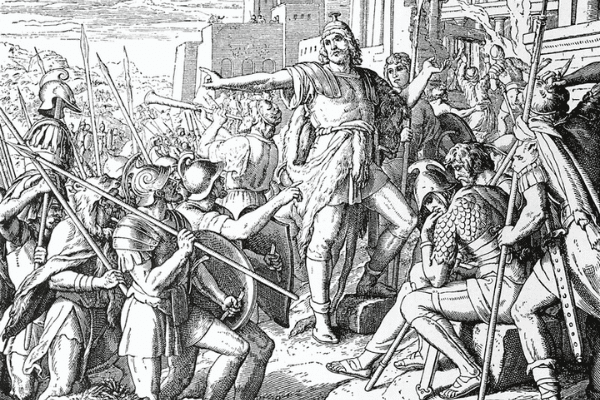 The Book of Maccabees is a collection of four volumes that recount the history of the Maccabees, the leaders of the Jewish rebellion against the Syrian king, Antiochus Epiphanes, and the Seleucid dynasty. They do not appear in the Jewish canon of the Tanakh (i.e. Torah, Prophets, Writings) that was formalized by Rabbi Yochanan ben Zakkai in the Council of Yavneh around 90 CE. The Book of Maccabees does appear in some volumes of the Septuagint.

The first two books appear in the canon of the Roman Catholic Eastern Orthodox scriptures and in the Protestant Apocrypha. They contain the most detailed accounts of the battles of Judah “Maccabee” (the hammer) and his brothers for the liberation of Judea from foreign domination. The story culminates in the rededication of the Jewish Temple in Jerusalem.

The first book, the only one that is considered historically accurate, was originally written in Hebrew by an anonymous Jewish author around the late 2nd century BCE. The Hebrew was translated very early into Greek, and only the Greek text has survived. It is the only contemporary source for the civil wars in Judea, covering the period of forty years from the accession of Antiochus (175 BCE) to the death of Simon the Maccabee (135 BCE). It is important to note that the word “God” does not appear in the work, nor does the word “Lord.”

The vocabulary and style of the  Second Book of Maccabees indicate it was originally written in Greek and opens with two letters written by Jewish residents in Judea to their brethren dwelling in Egypt. It covers the fifteen years from the end of the reign of Seleucus IV to the victory of Judah over Nicanor (175-160 BCE). The end of the book emphasizes the importance of observing the two Maccabean feasts—the Feast of the Dedication (Hannuka) on the 25th of Kislev and the Feast of Nicanor held on the 13th of Adar, the day before Purim.

The Second Book of Maccabees also recounts the story of the Jewish mother and her seven martyred sons. The mother’s name is not mentioned in the Book of Maccabees but in Lamentations Rabbah she is called Miriam bat Tanhum. The story relates how Antiochus IV Epiphanes arrested a mother and her seven sons and tried to force them to eat pork. One of the brothers said, on behalf of everyone, that even if they were all to die, they would not break the law. One by one, the sons were all tortured and murdered in front of their mother who exhorted them to not give in to the demands of the evil tyrant. In the end, the mother also dies though the cause of her passing is not described.

A similar story is told in the Talmud (Gittin 57b). In the Talmud’s version, the unnamed king, referred to as the “Emperor” and “Caesar”, demands the sons worship an idol. In the end, the mother commits suicide by throwing herself off a roof.

The third book of Maccabees is thematically anomalous, describing the historical account of the repression and miraculous salvation of Egyptian Jewry during the reign (221–205 BCE) of Ptolemy IV Philopator.  After Ptolemy’s defeat of Antiochus III in 217 BCE at the battle of Raphia, he entered Jerusalem and tried to enter the Temple, but was miraculously prevented. Ptolemy was furious and assembled the Jews in the Hippodrome in Alexandria and prepared to massacre them. Before the killing began, he insisted on recording their names but this effort exhausted all the papyrus in Egypt. He then prepared to have them trampled to death by elephants but this plan was also unsuccessful. The elephants became intoxicated and turned on their own people. According to the Third Book of Maccabees, Ptolemy relented after angels miraculously intervened. The king then underwent a change of heart and bestowed great favor on the Jews, and the day on which this occurred was ever after celebrated as a festival in memory of the deliverance.

The fourth book contains little historical information, focusing more on a philosophic discourse praising the supremacy of reason over passion, using the Maccabean martyrs as examples of the sins of the entire Jewish people being expiated by their suffering.