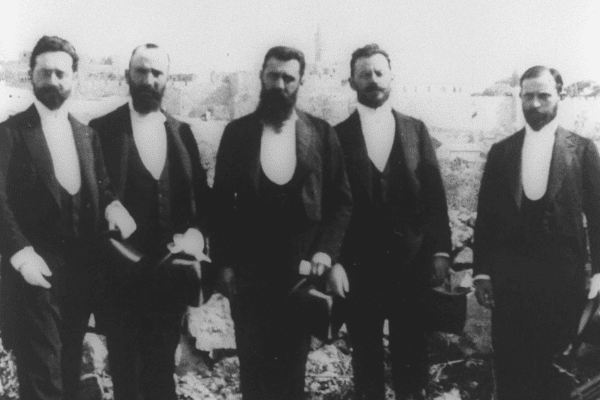 In June 2004, the Israeli Knesset instituted Herzl Day to be observed on the 10th of Iyar, Theodor Herzl’s birthday. On this day, a state memorial service is held on Mount Herzl in Jerusalem and at IDF camps and schools. Time is devoted to learning about the achievements and Zionist vision of Theodor Herzl, and a symposium in memory of Theodor Herzl is held in Jerusalem to discuss world Zionist issues. The Knesset holds a special session to mark Herzl Day.

Born on May 2, 1860, to a secular Jewish family in the Kingdom of Hungary in the Austrian Empire, baby Theodor was given the Hebrew name Binyamin Ze’ev. Herzl studied law and became a member of the German nationalist Burschenschaft fraternity but resigned due to its antisemitism.

After a brief legal career, he devoted himself to journalism and literature, working as a journalist for a Viennese newspaper and a correspondent for Neue Freie Presse in Paris. His early work did not focus on Jewish life.

As the Paris correspondent for Neue Freie Presse, Herzl followed the Dreyfus affair, a political scandal that divided the Third French Republic from 1894 until its resolution in 1906. It was a notorious anti-Semitic incident in France in which a Jewish French army captain was falsely convicted of spying for Germany. Herzl himself stated that the Dreyfus case turned him into a Zionist, and that he was particularly affected by chants of “Death to the Jews!” from the crowds.

Following the Dreyfus affair, Herzl rejected his earlier view in favor of Jewish assimilation, concluding  that antisemitism could not be defeated or cured, only avoided, and that the only way to avoid it was the establishment of a Jewish state. Around this time, Herzl started writing pamphlets about A Jewish State.

Beginning in late 1895, Herzl wrote Der Judenstaat (The Jewish State), which was published in February 1896 to immediate acclaim and controversy. The book argued that the Jewish people should leave Europe for Palestine, their historic homeland. The Jews possessed a nationality; all they were missing was a land and a state of their own. Only through a Jewish state could they escape antisemitism, express their culture freely and practice their religion without hindrance. Herzl’s ideas spread rapidly throughout the Jewish world and attracted international attention. Supporters of existing Zionist movements, such as the Hovevei Zion, immediately allied themselves with him, but he also encountered bitter opposition from members of the Orthodox community who feared the new movement’s secular ethos and from those seeking to assimilate into non-Jewish society.

He concluded his book with this boldly prophetic statement:

Therefore I believe that a wondrous generation of Jews will spring into existence. The Maccabeans will rise again. Let me repeat once more my opening words: The Jews who wish for a State will have it. We shall live at last as free men on our own soil, and die peacefully in our own homes. The world will be freed by our liberty, enriched by our wealth, magnified by our greatness. And whatever we attempt there to accomplish for our own welfare, will react powerfully and beneficially for the good of humanity.

Herzl began to energetically promote his ideas, continually attracting both Jewish and non-Jewish supporters. On 10 March 1896, Herzl was visited by Reverend William Hechler, the Anglican minister to the British Embassy in Vienna. Hechler had read Herzl’s Der Judenstaat, and the meeting became central to the eventual legitimization of Herzl and Zionism.  Hechler arranged an extended audience with Frederick I, Grand Duke of Baden, in April 1896. Through the efforts of Hechler and the Grand Duke, Herzl publicly met Wilhelm II, the last German emperor and king of Prussia, in 1898. The meeting significantly advanced Herzl’s and Zionism’s legitimacy in Jewish and world opinion.

On June 15, 1896, Herzl attempted to meet Sultan Abdulhamid II of the Ottoman Empire in Istanbul in order to present his solution of a Jewish State to the Sultan directly. He failed to obtain an audience but did succeed in visiting a number of highly placed individuals, including the Grand Vizier. Herzl presented his proposal to the Grand Vizier: the Jews would pay the Turkish foreign debt and help Turkey regain its financial footing in return for Palestine as a Jewish homeland. Prior to leaving Istanbul on June 29, 1896, Herzl was granted a symbolic medal of honor as affirmation for Herzl and the Jewish world of the seriousness of the negotiations.

Five years later, Herzl met with Sultan Abdulhamid II, who turned down Herzl’s offer to consolidate the Ottoman debt in exchange for a charter allowing the Zionists access to Palestine.

In 1897, Herzl was elected the president of the First Zionist Congress in Basel, Switzerland, a position he held until his death in 1904. Herzl visited Jerusalem for the first time in October 1898.

In 1903, Herzl attempted to obtain support for the Jewish homeland from Pope Pius X. Palestine could offer a safe refuge for Jews fleeing persecution in Russia. The Vatican decided that the Church’s policy was explained non-possumus on such matters, decreeing that as long as the Jews denied the divinity of Christ, the Catholics could not make a declaration in their favor.

At the same time, Colonial Secretary Joseph Chamberlain suggested a Jewish Colony in what is now Kenya. Herzl presented the plan, known as the “Uganda Project”,  to the Sixth Zionist Congress in Basel in August 1903. A majority agreed to investigate this offer but the proposal faced strong opposition, particularly from the Russian delegation who stormed out of the meeting. In 1905, the 7th Zionist Congress decided to decline the British offer and firmly committed itself to a Jewish homeland in Palestine.

Herzl, who died on July 3, 1904, did not live to see the rejection of the Uganda plan. A day before his death he told the Reverend William H. Hechler: “Greet Palestine for me. I gave my heart’s blood for my people.” His will stipulated that he should have the poorest-class funeral without speeches or flowers and he added, “I wish to be buried in the vault beside my father and to lie there till the Jewish people shall take my remains to Israel.” Nevertheless, some six thousand followed Herzl’s hearse, and the funeral was long and chaotic.

First buried in a cemetery in Vienna, his remains were brought to Israel 45 years later and, in 1949, they were reinterred on Mount Herzl in Jerusalem which was named after him. The coffin was draped in a blue and white pall decorated with a Star of David circumscribing a Lion of Judah and seven gold stars, recalling Herzl’s original proposal for a flag of the Jewish state. 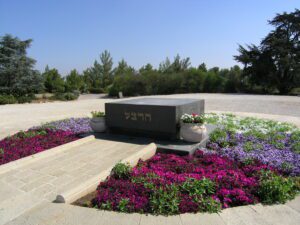