Studying the Bible in Hebrew 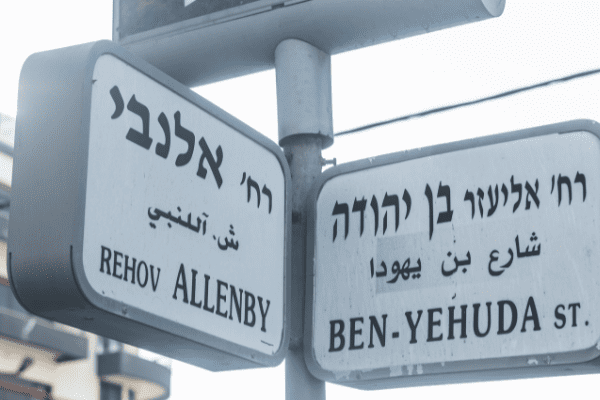 Everyone on earth had the same language and the same words.

I’ve always enjoyed listening to audiobooks, but I recently started listening to podcasts and am loving them! I heard two recent podcasts that reminded me of this week’s Torah portion, Noah.

Genesis 11 contains the famous story of the Tower of Babel where God confounds the language of the builders as a punishment. As we point out in “The Israel Bible,” many Jewish interpreters explain that originally mankind spoke Hebrew, which we refer to as “Lashon Hakodesh”, the Holy Tongue. After the sin of the Tower of Babel when language was all mixed up, people developed into separate nations. However, in the End of Days, many Jews believe that the whole world will once again learn Hebrew in order to call out to God “with a pure tongue.”

On a podcast called “Good Faith Effort” I heard Gordon Robertson of CBN explain to Rabbi Ari Lamm that many of America’s founding fathers were well versed in Hebrew. Ezra Stiles (1727-1795), president of Yale Universities required his students to learn Hebrew since at the time so many Americans saw themselves as imitating the Children of Israel and establishing a righteous nation.

Robertson said that only God could have orchestrated a Gentile like Ezra Stiles to advocate for Hebrew 100 years before Eliezer Ben Yehuda!

According to Robertson, Stiles had two motivations for studying Hebrew. He wanted to get closer to the original text, and because he was looking forward to the restoration of Israel. “Only God could have put that Zionist thread into the Christian community in American history 100 years before there were secular Jewish Zionists in Europe.”

I have also been listening to fascinating podcasts about Bible Translation, a topic I have been thinking a lot about since we are now in the middle of a major effort to revise the English translation of “The Israel Bible.”

On a podcast called “Working for the Word,” I was shocked to hear that there is a sizeable “King James Only Movement.” This movement believes that the KJV translation of 1611 was the inspired word of God, superior to any other translation, and even more accurate revelation than the original Hebrew text itself!

As a Jew, I couldn’t believe my ears. After all, God gave the Torah to Moses in Hebrew! We are therefore taught from an early age to read the Torah in Hebrew, and for us, all translations are by definition inferior. Anyone who was raised to read the Bible in Hebrew understands that when reading any other translation, that so much of the original meaning is quite literally, lost in translation.