Israel is the “Climate Innovation Nation” 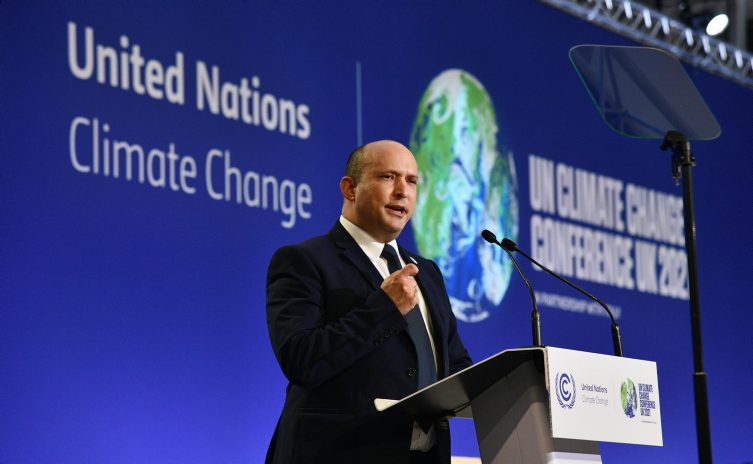 Of David. A psalm. The earth is Hashem's and all that it holds, the world and its inhabitants.

King David declares that “the earth is Hashem’s” implying that we have a sacred duty to safeguard the planet and not to destroy our precious natural resources. With growing concern over the environment and increasing pollution from around the world, Prime Minister Naftali Bennett addressed the UN Climate Change Conference in Glasgow, Scotland and told world leaders that Israel is prepared to lead the world and save the planet, fulfilling the bible’s environmental mandate.

In perfect English, PM Bennett said proudly, “Israel is a small country. We’re less than a third of the size of Scotland. Our carbon footprint may be small, but our impact can be mighty. If we’re going to move the needle, we need to contribute Israel’s most valuable source of energy: the energy and brainpower of our people. This is what fuels our innovation and ingenuity. This is where Israel can make a real difference.

“Israel may be 60 percent desert, but we managed to make it bloom. We may be in one of the driest places on earth, but we managed to become the world’s number one country in water innovation. As the country with the most start-ups per capita in the world, we must channel our efforts to saving our world…Israel is the “climate innovation nation” and we’re ready to lead the way.”

Believers Must Protect the Planet

Rabbi Shaul Judelman, former director of the Ecology Beit Midrash, a religious study group focused on the environment as it is treated in classical Jewish sources, has called on the government of Israel to act for the good of the environment.

“If you are a believing person then you know this world is a gift from God,” Rabbi Judelman explained to Israel365 News. “That makes the issue very simple. Take care of it.”

Judelman cited a verse in Genesis as the source.

Hashem took the man and placed him in the garden of Eden, to till it and tend it. Genesis 2:15

“We can argue about the politics but we should agree on that simple concept,” Judelman said. “There is a lot of money and political power at stake on both sides of the Climate Change issue but from a Biblical, God-oriented perspective, we have a responsibility to take care of the planet.”

Global Warming and the End of Days

From a more mystical point of view, rabbis have argued that the controversy over global warming can be interpreted as fitting into God’s plan for the End of Days.

Rabbi Yosef Berger explained that climate changes are just another tool in the hands of God to bring about the ultimate redemption. He explained that much of the time leading up to the Messiah will be a process of clarifying who is truly righteous.

“It is inaccurate even on the most simple level to speak of a ‘global climate’,” Rabbi Berger said. “No matter what the scientists say, this winter was warmer in some places, and in Greenland, the ice grew larger. Some places are having a drought and others, like Iran, are being flooded. Rather than think of it as a global problem, we need to see climate and weather as part of our relationship with Hashem since He is the one who rules over nature.”

Rabbi Berger suggested that the theory of global warming conforms perfectly to a section of the Book of Malachi that describes the end-of-days.

And you shall come to see the difference between the righteous and the wicked, between him who has served Hashem and him who has not served Him. For lo! That day is at hand, burning like an oven. All the arrogant and all the doers of evil shall be straw, and the day that is coming—said the lord of Hosts—shall burn them to ashes and leave of them neither stock nor boughs.But for you who revere My name a sun of victory shall rise to bring healing. Malachi 3:18

“If there is global warming, it will benefit the people who see in it the hand of God,” Rabbi Berger said.