God protects His children like an eagle protects her young 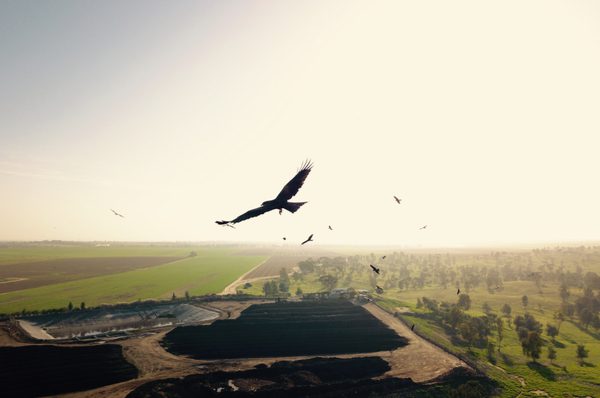 You see it, then it is gone; It grows wings and flies away, Like an eagle, heavenward.

In this verse in Proverbs, King Solomon advises against working hard just to gain wealth since wealth is something that is fleeting. He compares it to an eagle that is here one moment and gone the next as it soars heavenward. Perhaps the reason that King Solomon chose the eagle for this comparison is that the eagle flies higher than other birds and is, therefore, the bird that flies heavenward.

According to the medieval commentator Rashi, this is also the reason why God uses the metaphor of an eagle when describing the Exodus from Egypt: “I bore you on eagles’ wings and brought you to Me” (Exodus 19:4). As opposed to other birds who carry their young between their legs to protect them from predators flying above them, an eagle carries its young on its back (see Deuteronomy 32:11). Since the eagle flies higher than other birds, it fears no other flying predators. It’s only concern comes from people who might shoot at its young from below, and so it put its young on its back and uses its own body to protect its children from the arrows. Similarly, the Lord placed His angel between the Israelites and the Egyptians (Exodus 14:19-20) in order to protect His children by absorbing the Egyptian arrows and stones, and in that way carried them “on eagles’ wings.”

The phrase “I bore you on eagles’ wings” was also the basis for one of the names given to the operation which secretly airlifted almost fifty thousand Yemenite Jews to Israel between June 1949 and September 1950. “Operation Magic Carpet” is also called “Operation On Wings of Eagles,” since many of the Yemenite Jews had never seen an airplane before, and they likened the ride from Yemen to Israel as a fulfillment of this verse, “I bore you on eagles’ wings.” This Operation was just one example of the fulfillment of the State of Israel’s responsibility toward all Jews worldwide, summarized by Prime Minister Yitzhak Rabin in a speech he delivered to the Zionist Congress in 1992: “Our responsibility also extends to all Jews throughout the world… World Jewry should know that we are responsible for them and will do all we can to assist them when they are in need.”