Do Camels Prove the Bible is False? 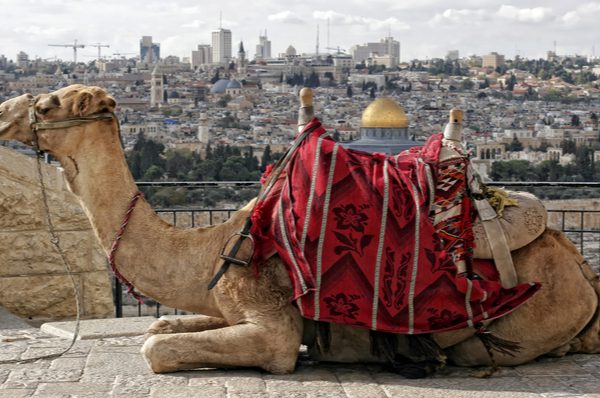 Raising her eyes, Rivka saw Yitzchak. She alighted from the camel

A 2014 article in the New York Times, “Camels had no Business in Genesis” argues that although camels appear frequently in Genesis, they weren’t even domesticated until several hundred years after the Patriarchs lived, implying that the Bible can’t be true.

The article says, “Camels probably had little or no role in the lives of such early Jewish patriarchs as Abraham, Jacob and Joseph, who lived in the first half of the second millennium B.C., and yet stories about them mention these domesticated pack animals more than 20 times.

“These anachronisms are telling evidence that the Bible was written or edited long after the events it narrates and is not always reliable as verifiable history.” The NYT quotes academic researchers from Tel Aviv University, an ultra liberal school in Israel, comparing the appearance of camels in Genesis to a description of “how people in the Middle Ages used semitrailers in order to transport goods from one European kingdom to another.”

Bottom line according to Tel Aviv University’s research, “In addition to challenging the Bible’s historicity, this anachronism is direct proof that the text was compiled well after the events it describes.”

First of all, while Abraham lived around the 19th century BCE, there are in fact many records of camels from even earlier in the same region. For example, a rock carving from Egypt depicts a camel being led by a man with a rope from the 23rd century BCE.

a rock carving from Egypt depicts a camel being led by a man with a rope from the 23rd century BCE.

The absence of evidence isn’t evidence of absence

Second of all, it’s hard to make sweeping, grandiose arguments based on ancient camel bones. Even if we haven’t found evidence of camel bones in Israel from the 19th century BCE, that doesn’t prove they weren’t there. When it comes to the field of Biblical archaeology it’s important to point out that the absence of evidence is not evidence of absence. In truth, while camels appear in Genesis, they play a very small role in the early patriarchal history. Whenever they are mentioned, they are listed last or near last among their possessions. Also, Abraham and Jacob are reported in the Bible to have traveled back and forth from Mesopotamia to Israel to Egypt, places with plenty of ancient evidence of domesticated camels.

Jewish scholars have explained that a careful reading of Genesis shows that camels were not in fact used as pack animals, but as ornamental animals used to demonstrate wealth, which is why they were ridden primarily by women such as Rebecca and Rachel.

So, what about the famous newspaper that claims to contain “all the news that’s fit to print”? According to professor of Bible at Bar Ilan University, Rabbi Joshua Berman, “the NY Times piece was an exercise in journalistic sin” by intentionally creating a misleading controversy pinning science against the Bible.

Rabbi Berman concludes his article, “Yes, Virginia, the Patriarchs really did ride on camels” that, “it turns out the NY Times article was not only sensationalist but incorrect. Camels in Genesis are right where they belong.”

A proper reading of the Bible actually shows that camels do not disprove the Bible, they confirm it!