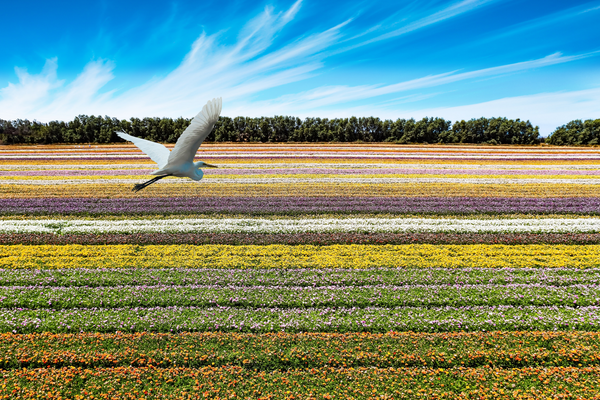 I will bless those who bless you And curse him that curses you; And all the families of the earth Shall bless themselves by you.”

Rabbi Shlomo Carlebach, known as the “Singing Rabbi”, was a rabbi and composer. Most of the popular tunes sung in synagogues today were composed by him. He also revitalized the study of Hassidut. Active in the 60s, most of his followers were hippies.

I became religious after he passed away, and even though I am a former hippie, the young followers of “Reb Shlomo” annoyed me. Hearing hippie terms being used in Israel in the 21st century seemed a bit too phony. But one habit was more annoying than the rest.

I cringed every time I heard that. It seemed so full of ego and haughtiness. Who are you to bless me? Blessings come from God.

But anyone who knows me now knows that instead of saying goodbye, I say, “Be blessed”. Why did I adopt this practice even though it used to bother me so much?

Something happened to change that.

When I began learning in yeshiva (school for Torah study), I investigated the many different paths to being religious. Many newly religious think that the only way to get serious about being a religious Jew is to “go black” and become Haredi (Ultra-Orthodox), but, driven by my aversion for black clothes, I searched until I discovered that this is simply not true. I discovered Moshav Mevo Modiim, the magical community in Israel established by “Reb Shomo”. It was a place outside of space and time. Going to “the Moshav” is like visiting San Francisco in 1960. The hippies there still wear the same tie-dye t-shirts and ripped jeans but they are in their 50s and 60s. And they all love the Torah and serving God in Israel.

If you pray there on Shabbat, prepare yourself for a LONG service. But it is absolutely not boring because of the amazing singing and dancing. The first time I prayed there, I was an anomaly; a 35-year old yeshiva student who was unmarried. My host insisted that I get called up to the say the blessing over the Torah and warned me to prepare myself. Getting called up to say the blessing over the Torah is an honor, but it isn’t really a big deal requiring preparation. Every 13 year old boy learns to recite the short blessings before and after the Torah reading. I didn’t quite understand what he meant.

It turns out that what I wasn’t prepared for was Michael Gollum, the gabbai. The gabbai is responsible for calling people up to the Torah and reciting a standardized blessing. But Michael is something else. He began channeling the divine, blessing me to find my soul mate, to have beautiful children, to be healthy, for my yet-to-be-born children to be healthy… Michael went on for almost fifteen minutes. On a regular Shabbat, there are seven people called up to recite the blessings over the Torah, and Michael blessed each person in the same way, taking his time to channel the blessing in fullness.

After an experience like that, hearing a young newcomer say, “holy brother, be blessed” sounded even more hollow to me.

But that changed seven years ago. That is when I began writing for Israel365. For the first time, I came into contact with devout Christians. They wanted to be part of the Israel365 community in order to bless Israel. More times than I could ever count, Christians told me that their acts of generosity were motivated by Genesis 12:3. So I went back and read it again.

I will make of you a great nation, And I will bless you; I will make your name great, And you shall be a blessing. I will bless those who bless you And curse him that curses you; And all the families of the earth Shall bless themselves by you. Genesis 12:2-3

I realized then that I was really an empty vessel, nothing more than a placeholder or signpost to tell people where to deposit their blessing. And when they did so, God has no choice but to bless them. They bless me so He will keep his promise and bless them.

After a Christian blessed Israel, I knew with absolute certainty what was about to happen. God was going to bless them in return.

It was a humbling experience, but it also shook something loose inside of me. God wanted to bless His creation and as a descendant of Abraham, I played a pivotal role in that. I had to make myself worthy to receive their blessings.

And I also wanted to be an active participant in the process and not just a passive receptacle. So I decided to imitate God and bless anyone who blesses Israel. I am not the source of blessings. God is. I can’t channel the divine, like Michael did. But I can say, “Be blessed.”

And so that is how I say goodbye to everyone. Sometimes I think it sounds silly or pretentious. It is embarrassing when I say it to rabbis or someone I know is actually holy.

But I do it anyway.

So be blessed, holy brother.

In the memory of Michael Gollum and Reb Shlomo.