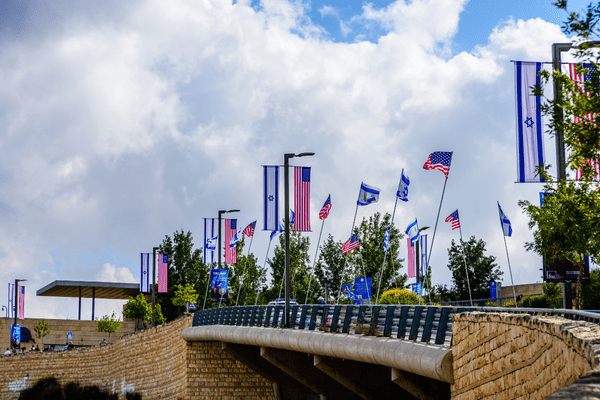 But now thus said Hashem— Who created you, O Yaakov, Who formed you, O Yisrael: Fear not, for I will redeem you; I have singled you out by name, You are Mine.

Israel is the United States’ most loyal (and arguably most important) ally in the Middle East. But few Americans realize that this contemporary political connection is rooted in the founding of the United States, well before the modern state of Israel was established.

John Adams is still remembered as one of the founding fathers and a leader in the Revolution. He was the second president of the United States and served two terms. A devout Christian who attended Church, Adams read the Bible daily as he considered it “a lifelong guidebook”.

“I have always endeavored to read it with the same spirit and temper of mind, which I now recommend to you: that is, with the intention and desire that it may contribute to my advancement in wisdom and virtue,” Adams wrote to his son in 1811.

His statesmanship and philosophy were based on his utter respect for the Jews which was explicitly expressed in his personal correspondence. Many  “enlightened” Christians such as Adams saw Jews as an ancient people who, by enunciating monotheism, laid the groundwork for Christianity. In a letter he wrote in 1808, Adams described the “Hebrews” as “the most glorious nation that ever inhabited this Earth.”

“The Romans and their Empire were but a Bauble in comparison of the Jews,” Adams wrote, while criticizing the French philosopher Voltaire for his antisemitic writings. “They have given religion to three-quarters of the Globe and have influenced the affairs of Mankind more, and more happily, than any other Nation ancient or modern.”

But the most remarkable aspect of Adams’ Biblical ideas was that he spoke of the creation of a Jewish state – 80 years before Theodore Herzl founded modern Zionism!

When John Adams left the White House in 1801, he maintained correspondence with Mordechai Manuel Noah, the most famous American Jew of his era. Noah was an American sheriff, playwright, diplomat, journalist, and utopian. Born of Portuguese Sephardic ancestry, Noah was the most important Jewish lay leader in New York in the early 19th century and the first Jew born in the United States to reach national prominence.

In 1818, Noah delivered a speech consecrating the new building erected by his own Congregation Shearith Israel, the Spanish and Portuguese Synagogue in New York. Noah’s “Discourse,” a copy of which resides in the archives of the American Jewish Historical Society, focused on the universal history of Jewish persecution at the hands of non-democratic governments and their peoples. An early Zionist, Noah believed that only when the Jewish people were reestablished in their own home, with self-governance, could they live free of oppression. Noah sent a copy of his “Discourse” to Adams.

Adams responded encouragingly to Noah, although the former president was evasive regarding Jewish self-governance. Adams expressed to Noah his personal wish that “your Nation may be admitted to all Privileges of Citizens in every Country of the World.” For Adams, Jews had earned their rights by virtue of their historic contributions and by virtue of their citizenship, but he did not respond to the idea of a Jewish homeland.

One year later, Noah returned from one of his frequent trips abroad and sent Adams a copy of his travel memoir titled Travels in England, France, Spain and the Barbary States. Adams responded with a letter praising the memoir but expressed regret that Noah had not extended his travels to “Syria, Judea and Jerusalem” as Adams would have attended “more to [his] remarks than to those of any traveler I have yet read.”

Adams made an astounding statement, expressing his vision of an army of Jews conquering their homeland.

“Farther I could find it in my heart to wish that you had been at the head of a hundred thousand Israelites,” Adams wrote. “And marching with them into Judea and making a conquest of that country and restoring your nation to the dominion of it. For I really wish the Jews again in Judea an independent nation.”

Adams should be known not just as a supporter and defender of Judaism, but one of the first Zionists in the modern era, paving the way for all of the American Defenders of Zion who followed. So many American leaders admirably supported Jews in their desire to return home and establish modern Israel. The outflowing of love and support from the evangelical community towards Israel is truly inspiring.

May the “special relationship” between the US and Israel continue in the years ahead!