The Sin of the Golden Calf 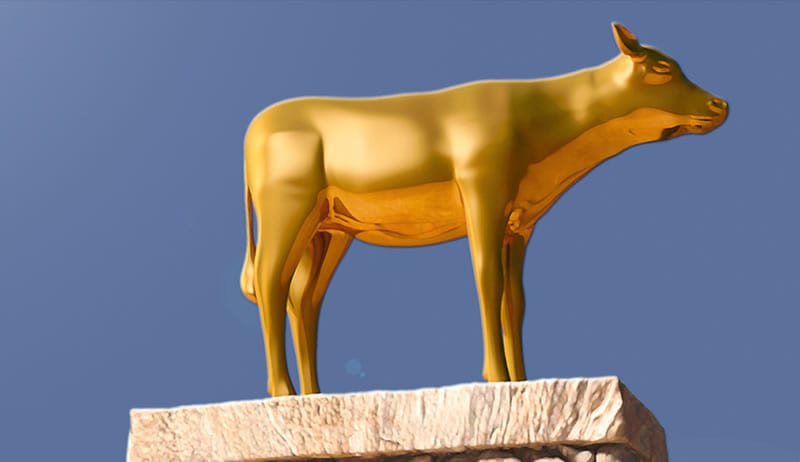 When He finished speaking with him on Har Sinai, He gave Moshe the two tablets of the Pact, stone tablets inscribed with the finger of Hashem.

Then Hashem sent a plague upon the people, for what they did with the calf that Aharon made.

When the people saw that Moshe was so long in coming down from the mountain, the people gathered against Aharon and said to him, “Come, make us a god who shall go before us, for that man Moshe, who brought us from the land of Egypt—we do not know what has happened to him.”

This section begins with God giving Moses the two tablets of stone upon which He has written with His own hand. After an extended break, the narrative returns to the people, awaiting Moses at the base of the mountain. They notice that Moses is late in returning, and they turn to his brother Aaron, asking him to build a new messenger to replace the missing Moses. Aaron asks the people to gather gold jewellery from their wives and children. He uses the gold to form a golden calf, and the Children of Israel proclaim, “This is thy god, O Israel, which brought thee up out of the land of Egypt.”

Meanwhile, God accuses the people of being “stiff-necked”, and threatens to wipe them out, starting over with Moses. Not even knowing exactly what the Israelites have done wrong to earn God’s wrath, Moses defends the people, telling God that if He were to do such a thing, the Egyptians would think He was unable to bring the people to safety. God concedes to Moses’s argument and allows him to take the stone tablets to the people.

When Moses arrives in the camp and sees what God saw, he is incensed. He throws down the tablets, smashing them at the base of the mountain. He destroys the golden calf, grinds it to a powder and dissolves it in water, which he forces the people to drink. He confronts his brother for leading the people astray, and calls upon all those who are for God to join him; the Levites join Moses and enact God’s justice among the people.

Now fully appreciating the gravity of their actions, Moses returns to the mountain to again ask God’s forgiveness on behalf of the people. God accepts.

In his defense of the people, Moses calls upon God to remember His pledge to Abraham, Isaac and Jacob. The Israel Bible points out that Moses was concerned should God wipe out the people and start over with him, as He suggested, the promise to the forefathers to give their descendents the Holy Land might no longer be binding. He therefore pleads with God to be merciful and spare the people.