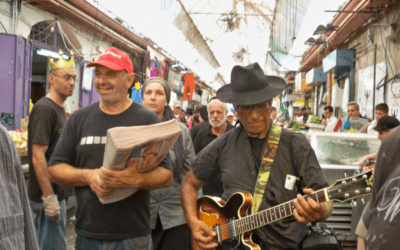 Yaakov lived seventeen years in the land of Egypt, so that the span of Yaakov's life came to one hundred and forty-seven years.

I [do this because], when I was returning from Paddan, Rachel died, to my sorrow, while I was journeying in the land of Canaan, when still some distance short of Efrat; and I buried her there on the road to Efrat”—now Beit Lechem.

After 17 years in Egypt, Jacob feels the end of his days approaching. Knowing he would die there and not return to his homeland, he makes Joseph swear to bury him in the Cave of Machpelah with his wife, parents and grandparents.

The Israel Bible emphasizes Jacob’s request. Even though his life is comfortable in Egypt, Jacob knows it is not the place where he belongs. If he cannot return to the Land of Israel in life, he at least wants to be brought there after death. Joseph learns from his father’s yearning, and likewise exacts a promise from his descendants to take his bones with them when they ultimately leave Egypt (50:25).

Some time later, Joseph hears his father is ill, and unlikely to recover. He takes his two sons to visit Jacob. Jacob tells Joseph that God appeared to him in Luz in the Holy Land and promised to give him numerous descendants and the Land of Israel as their inheritance. He claims Joseph’s children, Manasseh and Ephraim, as his own, equal in status to Joseph’s own brothers for the purpose of inheritance. Jacob also reminds Joseph that he was forced by circumstance to bury his beloved Rachel, Joseph’s own mother, on the road to Ephrath.

What do you think is the significance of Jacob giving his grandsons the status of sons for inheritance?