Haftarah Bereishit – The Bible is Our Mandate 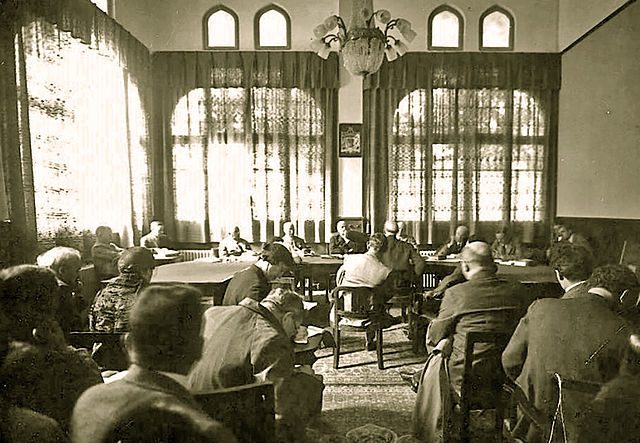 Thus said Hashem the lord, Who created the heavens and stretched them out, Who spread out the earth and what it brings forth, Who gave breath to the people upon it And life to those who walk thereon:

My witnesses are you —declares Hashem— My servant, whom I have chosen. To the end that you may take thought, And believe in Me, And understand that I am He: Before Me no god was formed, And after Me none shall exist—

After a devastating period of Arab violence in Mandatory Palestine, the British conducted the Peel Commission in 1937 to determine how best to divide Eretz Yisrael between the Jews and Arabs. It was the Peel Commission where they first recommended dividing the land according to the ‘Partition Plan’.  During the course of the hearings, David Ben Gurion, who served as chairman of the Jewish Agency at the time, appeared before the commission and boldly declared, “the Mandate is not our Bible. The Bible is our mandate.” While there are many reasons that the Land of Israel belongs to the People of Israel, it is the Torah that establishes our strongest claim to the Land, from the very opening words in Parshat Bereishit through all 929 chapters of the Tanakh.

While Jews pore over the Torah portion each week, many of us read the Haftarah without giving it too much thought. However, our ancient Sages chose the corresponding passages from the Navi very carefully. Deep, nuanced connections between the Parsha and the Haftarah do exist and studying them can enhance how we read and interpret both the Haftarah and the Parsha itself. Even a brief look at the weekly Haftorah can lead to a deeper appreciation of the relationship between Am Yisrael and Eretz Yisrael, the Land and the People of Israel.

Bereishit, of course, contains the fascinating story of how Hashem created the world. Three Hebrew words are used at various points to describe Hashem’s acts of creation: “Bereishit BARA Elokim – in the beginning God created” (1:1); “Vayar Elokim et kol asher ASAH – and God saw all that He had created” (1:31); and “VAYITZER Hashem Elokim et haadam – and Hashem God formed man” (2:7). Similarly, the Haftarah (Isaiah 42:5-43:10) offers a description of the Creator of the Universe paralleling many of the features described in Genesis with one verse in particular containing all three words of creation:  “All who are linked to My name, Whom I have created (birativ), formed (yitzartiv), and made (ahseetiv) for My glory”  (43:7).

Masters of the Hebrew language including the Malbim in his commentary “Biur Hamilot” explain the difference between these three words of creation: B-R-A means to create something from nothing, ex nihilo; Y-TZ-R is to fashion from existing materials; and A-S-A connotes completion.  It is therefore instructive to look carefully at the precise language when Yeshayahu offers a deeper message behind the purpose of creation.  According to the Navi, God is not only the Creator of the world, but the One who “created Jacob” (B-R-A) and “formed Israel” (Y-TZ-R) (verse 1). The Navi then invokes the forces of nature (verse 2) and all of the directions to bring about the final fulfillment of creation: “Fear not, for I am with you: I will bring your offspring from the East, will gather you out of the West; I will say to the North, “Give back!” And to the South, “Do not withhold! Bring My sons from afar, and My daughters from the end of the earth” (5,6). The earth itself, with God as its commander, is charged with bringing the People of Israel back to the Land of Israel for the ultimate objective of creation.

The Haftarah is teaching a subtle, yet essential message.  If all that we learn from Parshat Bereishit is that there was a Creator of the heavens and earth, that would be true but insufficient.  Ultimately, the creation story is about purpose and destiny.  God created the world, He formed the Land of Israel and fashioned the People of Israel. While His children were separated from His land for thousands of years and scattered to the ends of the earth, it is His ultimate plan as outlined in our Haftarah for the Jewish people to return to the Promised Land.

Indeed, as Ben Gurion declared, the Torah is truly the mandate for the return of the Jews to Israel.  It is not simply an accident of history to be determined by commissions, debated by committees or decided by politicians.  Instead, the return of the People of Israel from all over the world to the Land of Israel over the past century is part of the very fabric of creation, as old as the world itself.

Rabbi Dr. Ethan Eisen is a new Oleh to Israel and a rebbe in Yeshivat Lev Hatorah and Rabbi Tuly Weisz is the director of Israel365 and editor of “The Israel Bible.”