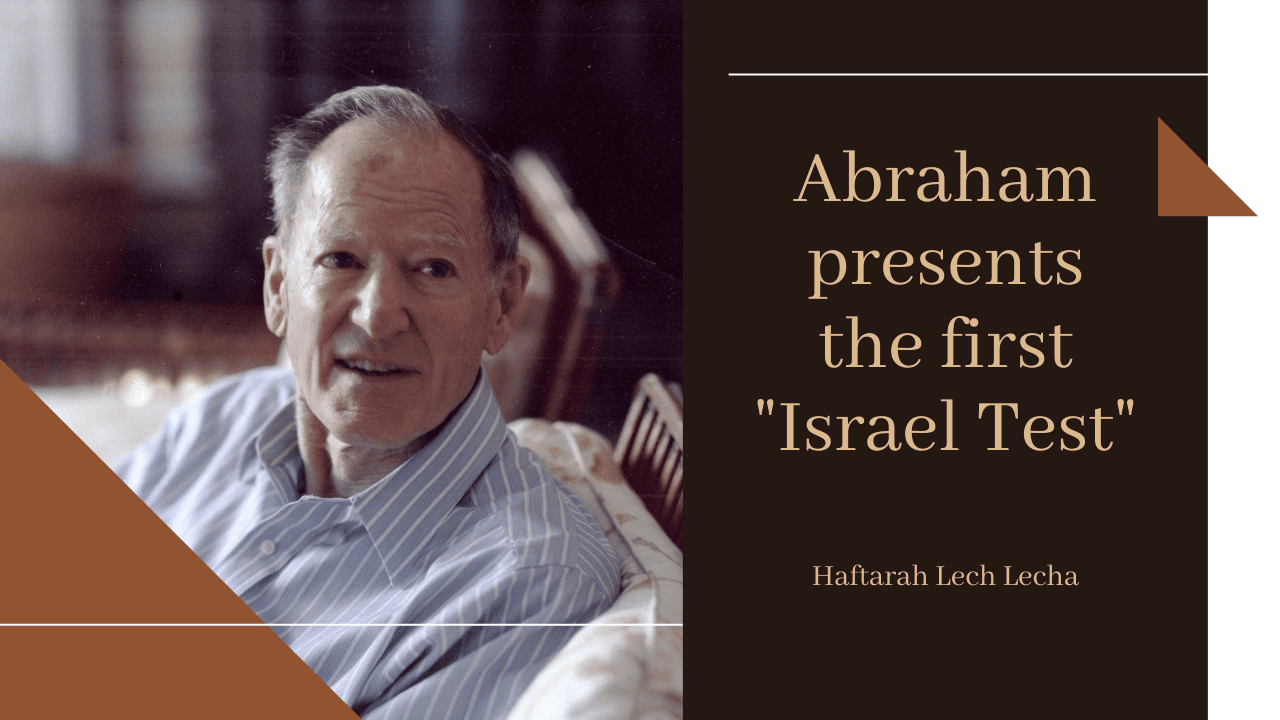 Why do you say, O Yaakov, Why declare, O Yisrael, “My way is hid from Hashem, My cause is ignored by my God”?

In 2009, noted economist George Gilder published The Israel Test, which boldly argued that individuals and nations fall into one of two categories depending on how they answer the following questions:

What is your attitude toward people who excel you in the creation of wealth or in other accomplishments? Do you aspire to their excellence, or do you seethe at it? Do you admire and celebrate exceptional achievement, or do you impugn it and seek to tear it down? Caroline Glick … sums it up: “Some people admire success; some people envy it. The enviers hate Israel.”

The question of passing or failing “The Israel Test” can certainly be applied to today’s member states of the UN and to countless nations throughout history, but is presented for the very first time in our Parsha and Haftarah.

Parshat Lech Lecha contains the famous story of the war between four and five kings (Genesis 14:1-16). After many years of conflict, the four kings took the upper hand over the five kings, which included Sodom, where Avraham’s nephew Lot had chosen to live.  Avraham heard of Lot’s capture, and he immediately gathered three hundred men to rescue Lot. Before the night was over Avraham and his small army defeated the mighty four kings. Malki-Zedek, King of Shalem, blessed Avraham and God, and according to Radak (Genesis 14:20) offered Avraham a tithe, which Avraham accepts.  The King of Sodom offered to share the loot with Avraham who refused to take even a shoelace.

The simple explanation is that the Torah records this story to teach about Avraham’s remarkable demonstration of family loyalty, even to a less-than-perfect nephew.  Yet if this is so, several questions emerge: Why does the Torah not record Lot’s response? Why is Sodom’s response interrupted by the appearance of Malki-Zedek King of Shalem who was not at all involved in the battle? Why does Avraham respond so favorably to Malki-Zedek? And finally, why does Avraham reject the offer of the King of Sodom with such contempt?

Our Haftarah (Isaiah 40:27-41:17) fills in some of the blanks when it comes to unraveling the deeper message behind this event. Isaiah quotes Hashem speaking to the idolatrous nations that antagonize Israel and invoking the military campaign of Avraham Avinu:

Who inspired the one from the east [i.e. Avraham who came from Haran, east of Israel], at whose every footstep righteousness (zedek) attended? Who delivered nations to him, and subdued kings before him? … Who brought about and accomplished this? He Who proclaimed the generations from the beginning: I, Hashem, am the first, and I am He Who will be with the last generations. (41:2-4)

The Radak explains that in this passage God rebukes the nations for not recognizing the great miracle behind Avraham’s victory. Adding insult to injury, the idolatrous nations respond by clinging even tighter to their false idols in verses 6 and 7:

These two passages contain the true message behind the war of the four and five kings. Avraham had been spreading knowledge of Hashem’s righteousness (zedek) throughout the region, having great influence on some (“et hanefesh asher asu b’charan”), less so on others. Surely, there could be no greater illustration of the Divine favor upon Avraham than his miraculous role in swiftly ending the ongoing conflict between the four and the five kings! Yet how do the participants – Lot and Sodom – respond?

By not even recording Lot’s response, the Torah is teaching that this story is not about Lot, or Avraham’s sense of family loyalty. This was a demonstration to the regional kings, yet the wicked king of Sodom focuses on the practical and material aspects of the victory: how to divide up the spoils. By utterly dismissing him, Avraham communicates that Sodom has missed the point entirely. Malki-Zedek, on the other hand, stands in stark contrast. The Torah interjects Malki-Zedek’s response as a model for all time of how the nations should respond to God’s intervention on behalf of Israel.  The Haftarah teaches us that “The Israel Test” is the real lesson behind the story of the four and five kings: Are you willing to acknowledge open miracles performed by God on behalf of His people?  Are you willing to acknowledge the truth in God’s messengers?  Or do you respond to Divine intervention by clinging even tighter to falsities and lies?

In modern Israel we have witnessed what can only be described as open miracles: Stunning military achievements, unparalleled agricultural innovations, nurturing a tolerant democracy in the most intolerant region, building world-class academic institutions and cutting-edge hospitals. Unfortunately, so far, many nations have failed the “Israel Test” and have reacted as the Navi prophesied by digging in their heels and intensifying their antagonism towards Israel. The Haftarah reassures us that ultimately we will see Malki-Zedek style responses from the world at large and certainly our immediate neighbors who will ask: “What is the secret behind Israel’s stunning successes?  How can we emulate their amazing achievements?” When the nations finally learn to pass “The Israel Test,” the entire world will merit all of the prophecies promised by Isaiah.

Rabbi Tuly Weisz is the director of Israel365 and editor of “The Israel Bible,” and Rabbi Dr. Ethan Eisen is a psychologist and a new Oleh to Israel, as well as a rebbe in Yeshivat Lev Hatorah.