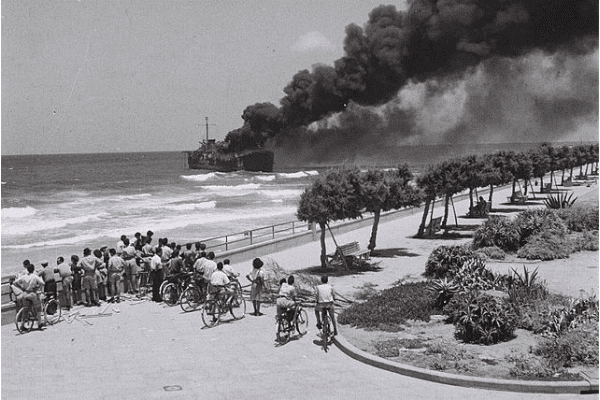 King David was now old, advanced in years; and though they covered him with bedclothes, he never felt warm.

Batsheva bowed low in homage to the king with her face to the ground, and she said, “May my lord King David live forever!”

In June 1948 the five-week-old State of Israel desperately needed weapons and the Irgun arranged for a ship full of armaments to arrive at the Tel Aviv port. Upon arrival of the ‘Altalena’, David Ben Gurion demanded the weapons be turned over to the Hagana. When the Irgun refused, the government ordered fire on the boat, sinking the invaluable weapons and leaving 16 Irgun men dead. With such a bloody incident so early in Israel’s history, it is remarkable that the Jewish State has avoided the violent revolutions or military coups so common to the Middle East.  Despite the tragic outcome of the Altalena affair, Israel’s relatively smooth political and military successions have been a source of pride for the Jewish State.

The obvious connection between our Parasha and Haftara (I Kings 1:1-31) is their focus on succession. Both Avraham Avinu and David Hamelech were getting old (“ba bayamim”), and concerned about the continuity of their respective legacies.  Each of them knew which son would be their rightful heir (Genesis 17:19; I Divrei Hayamim 22:9-10), yet neither Yitzchak Avinu nor Shlomo Hamelech was the first-born. Despite these similarities, a closer look reveals two very different stories with vastly different outcomes. Studied together, the Parasha and Haftara teach important lessons on how to, and how not to, pass on one’s legacy.

Parshat Chaye Sarah records the selection and grooming of Yitzchak with the well-known story involving Avraham’s loyal servant Eliezer.  In contrast to the smooth succession in our Parasha, the Haftarah details the rebellion by King David’s son Adoniah. Why was Avraham able to pass along his legacy so smoothly, while David’s kingdom was mired in bitter contention?

Avraham went to great lengths to groom Yitzchak to carry on his spiritual mission in the world.  The bulk of Parshat Chaye Sarah records in exceptional detail Avraham’s efforts to find a suitable wife for Yitzchak.  This mission succeeded in part due to Avraham fostering a loyal relationship with Eliezer, who proceeded faithfully despite his own self-interest. Furthermore, when it looked like there might be some unhealthy interactions between the his potential heirs, Yitzchak and Yishael, Avraham followed the strict orders of his wife Sarah and banished his eldest child from his home to prevent unsuitable influences. Ultimately, following Avraham’s death at the end of the Parasha, his careful spiritual estate planning had paid off and even Yishmael recognized Yitzchak as the unassailable heir to Avraham’s divine covenant (see Rashi, Genesis 25:9).

In contrast to the peaceful succession in our Parasha, the Haftarah begins by describing Adoniah surreptitiously plotting to seize his father’s kingdom along with David’s disloyal military officer Yoav.  Ultimately, Nathan the Prophet and Batsheva intercede on behalf of Shlomo, the rightful heir to the throne. Why was King David unable to ensure the same peaceful succession as Avraham achieved? The Haftarah states that David “never scolded him” (verse 6) and the lack of discipline contributed to Adoniah’s unfounded sense of entitlement and rebellion. Further, we are not told about David’s nurturing his rightful heir, his efforts to find Shlomo an appropriate wife, or protecting him from the schemes of his older brothers. We can learn from the Parasha and Haftara two fundamental lessons about passing on a lasting legacy: The seeds of succession must be sown early on to ensure a smooth process and strong discipline is needed to safeguard the proper choice.

The smooth transition of power in modern-day Israel has its roots in the infamous Altalena affair. After suffering a direct hit from the Haganah, the soldiers of the Irgun looked to their leader, Menachem Begin, for orders. He prohibited his men from shooting at other Jews and ordered them to hold their fire. Begin’s immortal words, “a war of brothers – never” had a major impact on the future of the State of Israel. The Altalena sank off the coast of Tel Aviv, but Israel avoided a civil war when Menachem Begin established that the State of Israel would not follow the precedents of Adoniah. We would do well to remember that as Israel is still a young and developing state, the decisions we make today will lay the groundwork for success or tragic failure, much as they did in our Parasha and Haftara.