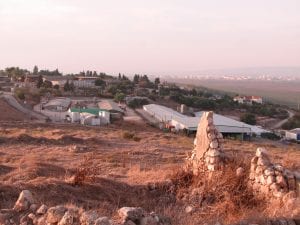 Jezreel (Hebrew: יִזְרְעֶאל‬‬ Yizre'el, "God will sow") was an ancient Israelite city and fortress originally within the boundaries of the Tribe of Issachar, and later within the northern Kingdom of Israel. Prior to the division of the United Kingdom of Israel, the city was the hometown of Ahinoam, third wife of King David, Michal, Saul's daughter being the first and Abigail, widow of Nabal being his second. According to the First Book of Kings, the royal palace of King Ahab, "one of the most famous of the royal residences of the kings of Israel", was in Jezreel, adjacent to the vineyard of Naboth. Ahab's capital remained in Samaria.

The modern archaeological site is located on a low hill on the southern edge of the Jezreel Valley's eastern edge in northern Israel. Archaeologists David Ussishkin and John Woodhead believe that Jezreel was a fortress that served as a cavalry base for King Ahab. Queen Jezebel executed by defenestration in Jezreel, by Gustav Doré
« Back to Glossary Index