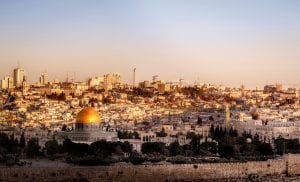 Ephraim Moses Lilien, Stamp for the Jewish National Fund, Vienna, 1901-2. The symbolic design presents a Star of David containing the word Zion in the Hebrew alphabet. May our eyes behold your return in mercy to Zion. Design by Lilien to the Fifth Zionist Congress, Basel, December 1901.

Zion (Hebrew: צִיּוֹן‎ Ṣîyōn, modern Tsiyyon; also transliterated Sion, Sayon, Syon, Tzion, Tsion) is a placename often used as a synonym for Jerusalem as well as for the biblical Land of Israel as a whole. The word is first found in 2 Samuel 5:7 which dates from c. 630–540 BCE according to modern scholarship. It originally referred to a specific hill in Jerusalem (Mount Zion), located to the south of Mount Moriah (the Temple Mount). Mount Zion held a Jebusite fortress of the same name that was conquered by David and was re-named the City of David; see Names of Jerusalem. That specific hill ("mount") is one of the many squat hills that form Jerusalem, which also includes Mount Moriah (the Temple Mount), the Mount of Olives, etc. Over many centuries, until as recently as the Ottoman era, the city walls of Jerusalem were rebuilt many times in new locations, so that the particular hill known as Mount Zion is no longer inside the city wall, but its location is now just outside the portion of the Old City wall forming the southern boundary of the Jewish Quarter of the current Old City. Most of the original City of David itself is thus also outside the current city wall.

The term Tzion came to designate the area of Davidic Jerusalem where the fortress stood, and was used as well as synecdoche for the entire city of Jerusalem; and later, when Solomon's Temple was built on the adjacent Mount Moriah (which, as a result, came to be known as the Temple Mount) the meanings of the term Tzion were further extended by synecdoche to the additional meanings of the Temple itself, the hill upon which the Temple stood, the entire city of Jerusalem, the entire biblical Land of Israel, and "the World to Come", the Jewish understanding of the afterlife.

In Kabbalah, the more esoteric reference is made to Tzion being the spiritual point from which reality emerges, located in the Holy of Holies of the First, Second and Third Temple.