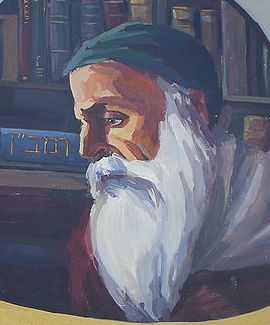 (1194-1270) – Rabbi Moshe son of Nachman, also known by his acronym the Ramban (Rabbi Moshe ben Nachman). The Ramban was born in Gerona, Spain. He was one of the leading Torah scholars of the Middle Ages, and authored numerous works on Torah subjects, including a famed commentary on the Pentateuch.

רמב״ן‬) and by the contemporary nicknameBonastruc ça Porta (literally "Mazel Tov near the Gate", see astruc), was a leading medieval Jewish scholar, Sephardic rabbi, philosopher, physician, kabbalist, and biblical commentator. He was raised, studied, and lived for most of his life in Girona, Catalonia. He is also considered to be an important figure in the re-establishment of the Jewish community in Jerusalem following its destruction by the Crusaders in 1099.