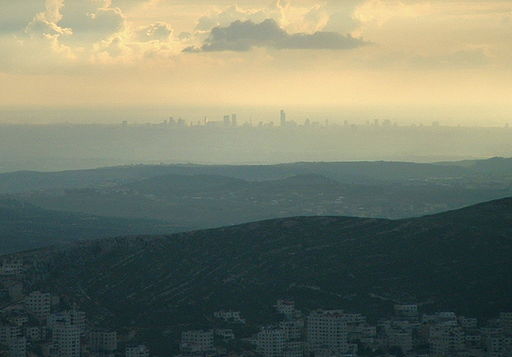 The view from Mount Ebal of Tel Aviv

הר עיבל‬ Har ‘Eival) is one of the two mountains in the immediate vicinity of the city of Nablus in the West Bank (biblical Shechem), and forms the northern side of the valley in which Nablus is situated, the southern side being formed by Mount Gerizim. The mountain is one of the highest peaks in the West Bank and rises to 940 m (3,080 ft) above sea level, some 60 m (200 ft) higher than Mount Gerizim. Mount Ebal is approximately 17 km2 (6.6 sq mi) in area, and is composed primarily of limestone. The slopes of the mountain contain several large caverns which were probably originally quarries, and at the base towards the north are several tombs.