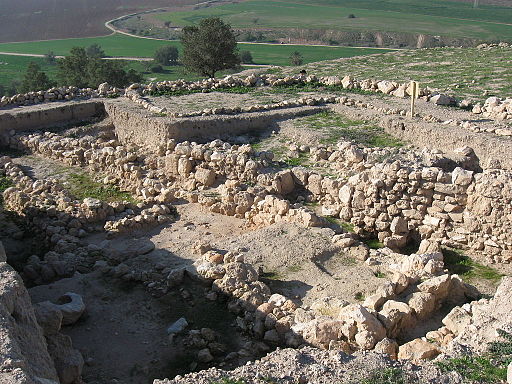 Gath or Gat (Hebrew: גַּת‬, wine press; Latin: Geth), often referred to as Gath of the Philistines, was one of the five Philistine city-states, established in northwestern Philistia. Gath is often mentioned in the Hebrew Bible and its existence is confirmed by Egyptian inscriptions.

Gath is mentioned in the El-Amarna letters as Gimti/Gintu, ruled by the two Shuwardata and ʿAbdi-Ashtarti.[citation needed] Another Gath, known as Ginti-kirmil (Gath of Carmel) also appears in the Amarna letters.

The site most favored as the location of Gath is the archaeological mound or tell known as Tell es-Safi in Arabic and Tel Zafit in Hebrew (sometimes written Tel Tzafit), located inside Tel Zafit National Park, but a stone inscription disclosing the name of the city has yet to be discovered. Recent excavations at the site have produced dramatic evidence of a siege and subsequent destruction of the site in the late 9th century BCE, which can be related to the biblical verse that mentions its capture by Hazael of Aram Damascus.

A Gittite is a person from Gath.