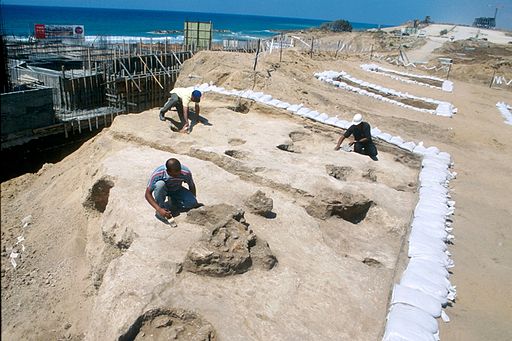 אַשְׁקְלוֹן‬, [aʃkeˈlon]), also known as Ascalon (/ˈæskəlɒn/; Greek: Ἀσκάλων, Askálōn; Arabic: عَسْقَلَان‎, ʿAsqalān), is a coastal city in the Southern District of Israel on the Mediterranean coast, 50 kilometres (31 mi) south of Tel Aviv, and 13 kilometres (8.1 mi) north of the border with the Gaza Strip. The ancient seaport of Ashkelon dates back to the Neolithic Age. In the course of its history, it has been ruled by the Ancient Egyptians, the Canaanites, the Philistines, the Assyrians, the Babylonians, the Greeks, the Phoenicians, the Hasmoneans, the Romans, the Persians, the Arabs and the Crusaders, until it was destroyed by the Mamluks in 1270.

The Arab village of al-Majdal or al-Majdal Asqalan (Arabic: المجدل‎; Hebrew: אל-מג'דל, מגדל‎) was established a few kilometres inland from the ancient site by the late 15th century, under Ottoman rule. In 1918, it became part of the British Occupied Enemy Territory Administration and in 1920 became part of Mandatory Palestine. Al-Majdal on the eve of the 1948 Arab–Israeli War had 10,000 Arab inhabitants and in October 1948, the city accommodated thousands more refugees from nearby villages. Al-Majdal was the forward position of the Egyptian Expeditionary Force based in Gaza. The village was conquered by Israeli forces on 5 November 1948, by which time most of the Arab population had fled, leaving some 2,700 inhabitants, of which 500 were deported by Israeli soldiers in December 1948. The town was initially named Migdal Gaza, Migdal Gad and Migdal Ashkelon by the new Jewish inhabitants. Most of the remaining Arabs were deported by 1950.

In 1953, the nearby neighborhood of Afridar was incorporated and the name "Ashkelon" was readopted to the town. By 1961, Ashkelon was ranked 18th among Israeli urban centers with a population of 24,000. In 2017 the population of Ashkelon was 137,945.