Weekly Torah Portion: The Forefathers and the Land 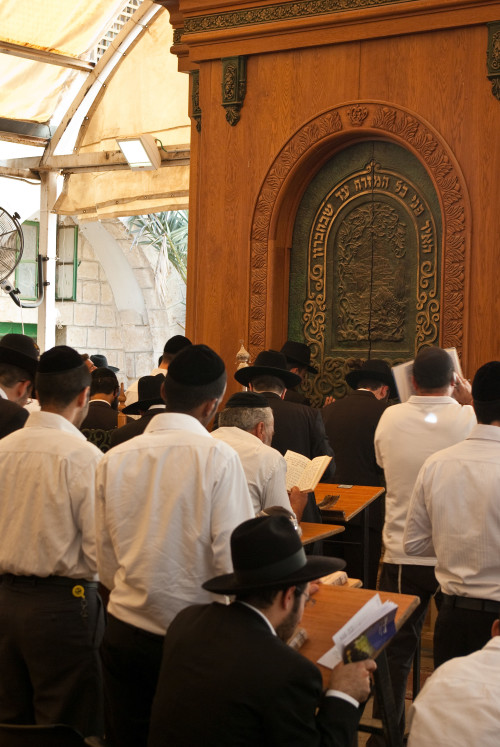 Jewish Prayer at the Cave of the Patriarchs [Photo: Antoine Taveneaux, Wikimedia Commons]

In this week’s portion, we finish the book of Genesis with the conclusion of the story of Joseph and his brothers– the brothers and Jacob are all in Egypt, Jacob blesses his children before his death, and the book closes with the death of Joseph.

What struck me, though, is the level of detail that Jacob uses to describe the Machpela cave.  Clearly, this is a location that is well known in the family, for each of the forefathers and foremothers is buried there.  In any case, mentioning the cave of Machpela in Mamre should have been enough to identify the place.  And yet, Jacob recites the history of the place, the fact that Abraham purchased it from Ephron and the list of each of the family members who is buried there.

Later, after Jacob’s death, the funeral procession is described in detail, and again, the identification of the place of burial mentions that the cave was purchased by Abraham (50:13). And there was similar detail when Abraham actually purchased the cave.  Each part of the negotiation is set forth, and over and over again it is mentioned that Abraham has purchased the cave.  (Genesis 23)

The detail mentioned here is not for the understanding of the children of Jacob.  It is for the understanding of the generations who will read this account in later years.  Today, the nations of the world do not recognize that Hebron is a Jewish city.  Even some of the Jews in Israel have trouble recognizing our claim to the city and question whether a house legally purchased by Jews in Hebron, just a few hundred meters from the Cave of Machpela, can be occupied by Jews.

But beyond the detail and the repetition, we cannot lose sight of the fact that Jacob insists on being buried in Hebron.  It is his most important testament to his children and, in fact, Joseph obtains permission from Pharaoh to leave Egypt because of his pledge to his father.  And before Jacob even left for Egypt, God promises him he would return to the land, although not necessarily in his lifetime (46:4). Clearly, this promise, more than anything, calms Jacob and reassures him.

The Land of Israel is the land promised to our forefathers.  Although these great men wandered through the land, and Abraham and Jacob both left the land for periods of time, they were all buried in the land.  Each of the forefathers returned to their source, to the land that God had promised to them and to their children ever after.

For centuries, there were Jews who would try to make it to the Land of Israel before they died, to be buried there if nothing else.  Jews outside of Israel are often buried with a bit of dirt from the Land of Israel thrown into the grave.  And many Jews today living outside of Israel arrange to be buried in Israel.  Perhaps it is the contact with eternity that is entwined with death that pulls Jews back to the Land of their fathers, the land where Abraham bought a burial cave for his wife Sarah, a cave that has remained at the center of our national identity ever since.

It is this clinging to the land that stands out in Jacob’s final messages to his children.  And it is this devotion to the land as the concrete expression of a faith in God’s promises to His people that has kept the people of Israel together, strong and faithful for centuries.