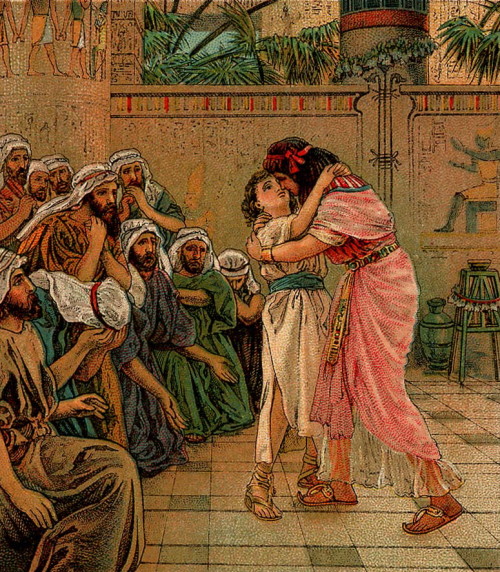 Last week’s portion ended with a cliff-hanger, as Joseph called for Benjamin’s servitude. This week’s portion opens with Judah stepping forward in defense of the brother whose safety he personally assured his father.

Judah reviews the events to date for Joseph: you asked after our family, we told you we have a father and a younger brother on whom he dotes. You insisted on us bringing Benjamin, which we did, but we cannot afford to return without him, or our father will surely die. Judah pleads with Joseph to allow him to stay in Benjamin’s stead, sending the youngest son back to his father with the remaining brothers.

Moved by Judah’s apparent love for Benjamin and care for their father, Joseph at long last reveals himself to his brothers. He reassures them that everything has taken place in accordance with God’s plan that he should be in a position to save them and all of Egypt from the famine, and therefore they should not blame themselves for what has transpired. As the Israel Bible points out, the brothers fear Joseph will want his revenge, but he indicates he has no such intentions, as everything that has happened has been God’s will. In fact, Joseph’s descent into Egypt was necessary to set in motion the slavery in Egypt and the eventual ‘great deliverance’ and arrival in the Promised Land.

Joseph tells his brothers to hurry back to their father and bring him, their families and all their belongings to Egypt, where Joseph can use his power and influence to care for their needs. At last, the reunited sons of Rachel embrace and weep on each other’s shoulders.

Pharaoh hears of the family reunion and is also pleased. He, too, urges the brothers to hurry back with Jacob and their families. He tells them not even to worry about their belongings, as he will give them the best Egypt has to offer.

Joseph dispatches his brothers in wagons laden with gifts, especially for Benjamin and Jacob. The news of Joseph’s survival and position, along with the gifts he had sent, serve to revive Jacob’s spirit greatly and he is overjoyed at the prospect of seeing his beloved son again before his death.