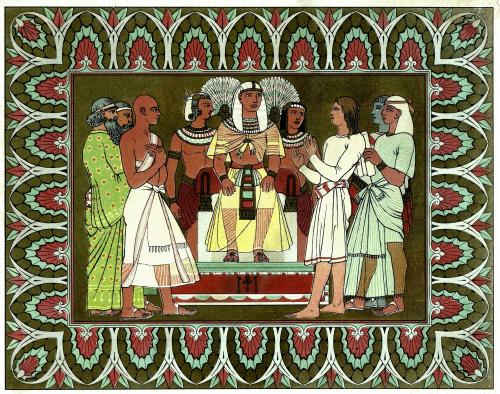 In this week’s Torah portion, we continue the story of Joseph in Egypt. The portion begins with Joseph’s rise to power, thanks to his successful interpretation of Pharaoh’s dream. He is given full responsibility for feeding the nation and, indeed, surrounding nations, during the upcoming famine. It is in this position that he meets up with his brothers, those same people who had so cruelly sold him as a slave many years earlier.

In Genesis chapter 42, verses 7-8, we are told repeatedly that Joseph recognizes his brothers but they fail to recognize him. This is easy to understand, as he is now older, dressed as royalty, speaking Egyptian, and has attained a position that his brothers would never have expected him to fill. He also has an Egyptian name (41:45). But Joseph recognizes his brothers and he remembers his dreams (42:9). This is clearly a reference to one of the causes of their jealousy and hatred for him, as they declared on that fateful day so many years earlier — “Here comes this dreamer” (37:19). Joseph remembers his brothers and how they had treated him, their own flesh and blood. In the story that follows, Joseph attempts to test his brothers, their loyalty to one another and their willingness to sacrifice for each other, rather than kill one another.

Joseph is not disappointed, for clearly the brothers have learned their lesson and repented. When Joseph imprisons them all and demands that they send a representative to bring Benjamin, they refuse. They remain in custody for three days. When Joseph suggests that they surrender one brother to his custody while the rest return to Canaan to bring him Benjamin, they immediately recognize their sin against Joseph: “In truth we are guilty concerning our brother, in that we saw the distress of his soul, when he begged us and we did not listen. That is why this distress has come upon us” (42:21-22). In the end, Joseph seizes Simeon and imprisons him and the rest have no choice but to leave without him.

Jacob refuses to let Benjamin go. However, when the famine has deepened and they are facing starvation, Reuben steps forward and takes responsibility: “Kill my two sons if I do not bring him back to you. Put him in my hands, and I will bring him back to you” (Verse 37).

Finally, when Joseph frames Benjamin by planting royal vessels in his bags, Judah stands up for Benjamin and insists on being imprisoned in his stead.  Joseph sets in motion an elaborate plan to test his brothers. He must know whether they will be willing to betray their younger brother, Benjamin, son of Rachel, his own mother, or whether they have repented their ways. Only after they have passed the test will he reveal himself to them.

Interestingly, the portion ends with verse 17 of chapter 44, just before Judah begins his moving, dramatic monologue to Joseph. The portion leaves us in great suspense — will Joseph take mercy on his brothers or will he manipulate his position to avenge what they had done to him years earlier? By cutting the portion at this point, by leaving us with this question, we recognize that Joseph could easily have taken either route. Not only are the brothers being tested, but Joseph is being tested as well. The fate of the Jewish people rests on this meeting between the brothers — will it end with tears and embraces, or in irreparable division and animosity?

We, who have read the next verses, already know the answer. But sometimes it is necessary to cut the portion at that pivotal point, so that we can test ourselves, ask ourselves the question. When we reach the abyss, are we able to bridge the gap — are we able to produce the words and the feelings necessary to bring unity and love among our people?