Weekly Torah Portion: Lessons from the Sale of Joseph 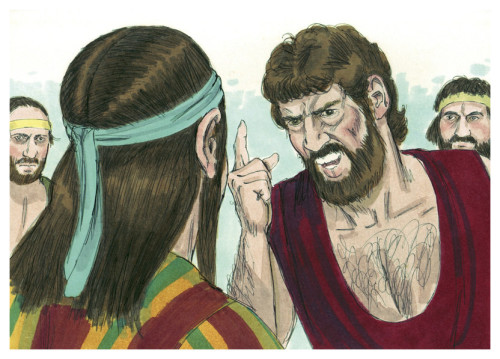 Joseph and his Brothers [Illustration: Jim Padgett via Wikimedia Commons]

Many wondered why the 10,000 Jews expelled from their homes in Gaza did not use weapons to defend their land. Thank God, the lesson of Joseph’s sale remains strong.

This week’s portion begins the story of Joseph. We learn that Jacob favors Joseph and buys him a striped coat, which results in the brothers’ terrible jealousy of him. Joseph is introduced to us as a dreamer, and as he interprets his dreams, it becomes clear that he sees himself as superior to his brothers. The story progresses, or actually regresses, until the brothers plot to kill Joseph, then sell him to a caravan of traders instead. Joseph is brought to Egypt, sold as a slave and the portion ends with him in prison.

The resolution of this story will play itself out in subsequent chapters, but it is the sale of Joseph by his brothers that lies at the core of all that happens in this portion. In the middle of the portion, clearly interrupting the flow of the story, is the story of Judah and Tamar. But this story is carefully placed in order to present a different Judah, a man who has clearly strayed from righteousness, and is suffering for it. His sons have been killed by God, he visits a prostitute (or so he thinks) and is willing to have his daughter-in-law killed. Following the sale of his brother Joseph, a horrendous crime in which he played a central role, Judah is a troubled man.

The unity of the brothers is unraveling. How is it that these jealous, warring brothers will become a unified nation able to serve God and receive His commandments at Sinai?  The bondage in Egypt will play a critical role in forging the nation. The Nation of Israel will not emerge from slavery a perfect nation. But they will have become a nation, and they will leave Egypt as one. Perhaps it is Pharaoh who helps this process along – for when he enslaves the Children of Israel and then decrees that all Jewish boys must be put to death, he creates a common destiny for all of the Children of Israel.

Centuries later, in the second century of the Common Era, there were 10 martyrs of Israel, scholars and rabbis who were put to death by the Romans for their insistence on maintaining their faith, teaching the Torah and keeping God’s commandments. These were very righteous men, and their wisdom and teachings are studied to this very day. On Yom Kippur, there is a portion of the prayer service that tells the story of these 10 martyrs and states a curious reason for their horrible suffering – the sale of Joseph by his brothers. Clearly, these 10 martyrs, living so many centuries after the sale, could not be held responsible for that event. Also, by ascribing their suffering to such a distant event, it is clear that these men were righteous and their personal deeds did not bring such a terrible fate upon them.

I can’t begin to give an answer as to why these 10 men were killed. But I believe the prayer service is making a profound connection between the sale of Joseph and centuries of Jewish history. The sale of Joseph is the epitome of civil war, of sibling rivalry at its ugliest and most dangerous. The second Temple period, the last centuries before the Common Era and the first century of the Common Era, was rife with division and downright hatred within the Jewish people. Our sages consider this to be the primary reason for the destruction of the Temple.

The sale of Joseph was a terrible crime and foreshadows the worst times in our history, when Jew fought against Jew. Since the destruction of the Second Temple, the Jewish people have been united in their absolute refusal to fight against one another. We are vociferous and often argue loudly and vehemently, but we will not resort to violence or civil war.

It took centuries, but we finally did learn the lesson of the sale of Joseph. Perhaps the death of the 10 martyrs actually sealed the chapter on this issue and forever seared the idea in our collective consciousness that we will never resort to civil war. Perhaps, like the bondage in Egypt, it was the hatred directed against us as a nation that helped to solidify this consciousness.

In August 2005, when close to 10,000 Jews were forced from their homes in Gush Katif in the Gaza Strip, many wondered why the Jews of Gush Katif were not violent – did not use weapons to defend their homes and property. Thank God, the lesson of Joseph’s sale remains strong.