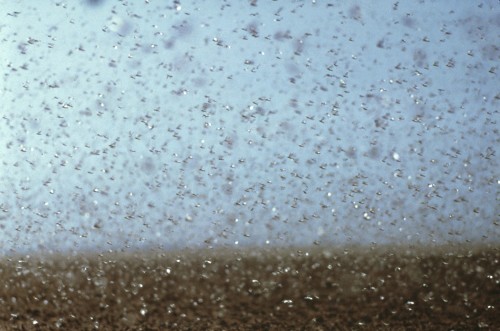 A swarm of locusts on the move. [Photo: CSIRO / Wikimedia commons]

God tells Moses to return once more to Pharaoh, for He has hardened his heart against the plagues and God wishes to send another one: locusts. Whatever grain was not destroyed by the plague of hail will now be consumed by the flying insects.

Pharaoh’s courtiers are moved by Moses’s threats, and ask Pharaoh to let the Hebrews serve their God as requested. Pharaoh acquiesces, but only on condition that the men go alone, leaving the women and children behind. Moses declines, and the swarms sweep through the country, devastating whatever is left of the agricultural crop.

Pharaoh begs for mercy, and is given a reprieve, as God sends a strong wind to blow the locusts away. Pharaoh does not free the slaves, however, so God sends a crippling darkness over the land. This time, to end his suffering, Pharaoh agrees to allow women and children to join in the sacrificial service, but asks that the cattle be left behind. Again Moses refuses those terms, and Pharaoh orders him out of his presence, never to return.

By the plague of locusts, God adds an interesting facet: until now, as the Israel Bible points out, God has said the plagues were intended to show Egypt (and the world) God’s power. Now, however, He adds another dimension: the Israelites are meant to recognize God through His plagues. This teaches us that even the faithful occasionally need a “spiritual boost”.